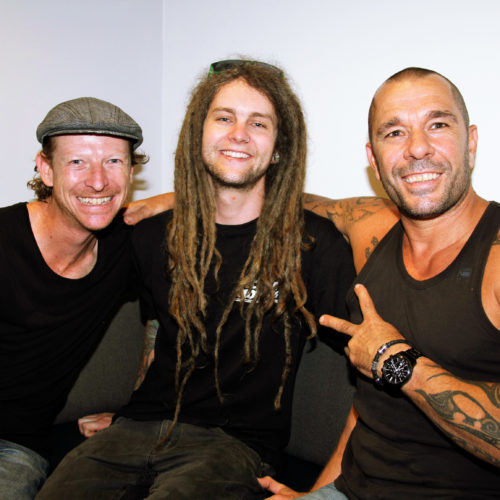 From the first strum of the guitar to the beat of the drums and the deep chords of the bass guitar you just can’t get enough. Midway through one song the band members actually change instruments and show how versatile they truly are. The beer keg drum is definitely a feature used later in the show in a jaw-dropping, tension-filled segment that shows all three band members beating the drums in unison as the tempo increases followed by some pretty impressive stick throwing.

Mason Rack grew up playing percussion from the age of six. His father Billy was a very talented Jazz musician and surfer. Mason was born in Southport, Queensland. His mother who he lived with growing up would listen to a lot of music that would become influences throughout his life.

Who is the songwriter in the group, and where do you get your inspiration from?

We all are but I,(Mason) do a lot of it. Our inspiration comes from everything, everyday life, trials and tribulations, successes, and failures.

What is your latest album called? Where did the name come from?

Our Album is called Big Bad Machine and refers to the male anatomy.

What do you think sets you apart from other bands?

We have a relentless schedule. We don’t stop, we continue to perform the show by doing some different things that other bands don’t do. We have an empty beer keg as a drum line that we do syncopated movements, and we throw the sticks as well. Also with one of the songs we get up and change instruments in the middle of the song without the song stopping which is interesting.

Mason, what is the biggest life lesson that you have learned?

To think before you speak……but I don’t seem to be doing much of that right now.

What is in store for Mason Rack for the remainder of the year?

Our focus right now is to get ready for our 6th European Tour In May. We hit Germany and the Netherlands.

I want you all to tell me something about each of you that not very many people know.

Jamie – Loves socks, and in fact, tonight is wearing his pretzel socks.

Mason – Is well known for his deep husky and reportedly sexy voice. He is also very proud of the fact that he is now 17 years clean and sober.

Jules – Loves Golf and shows me his swing.

What do you love the most about coming back to the Fraser Coast?

Definitely the people. They get into the music and they are all out to have fun.