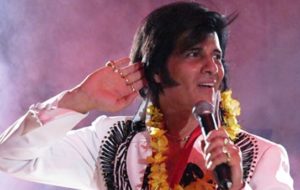 2017 marks forty years since Elvis Presley passed away. Known as the ‘King of Pop’ Elvis is one of the most celebrated musicians in life and indeed in death during the 20th Century. Elvis’s career spanned from 1956 right through to the year of his death in 1977. Mourned by millions throughout the world, there are currently over 85,000 Elvis Impersonators in the world, but only a handful of very good ones.

Mark Andrew Tabone aka, Dean Vegas is one of them. While he is a regular on the Fraser Coast gig circuit. He has also performed throughout the world. In fact his fans can’t seem to get enough of the man that is Dean Vegas. The Elvis Presley tribute artist has just spent time in America performing in the Collingwood Elvis Festival, which is the largest Elvis Festival in the world. Dean knows this stage well especially after winning there in the year 2000 while representing Australia. “I have played there six or seven times now, it is my second home”, Dean said.

While growing up Dean admired Elvis, “ People are inspired by many different things. For some, it could be a sport, or a group, for me it was Elvis. I am blessed that I get to do this and have been doing so now for over twenty years.” Dean said.

During his career Dean has performed with The Jordanaires, The Sweet Inspirations, and The Imperials, both groups have provided backup on Elvis Presley’s recordings. He has also toured places like Canada, New Zealand, Beirut, Memphis, Tonga, Bali, Dubai and China.

Dean was also the first Australian to be invited to perform at the Elvis Memorial dinner in Memphis, this event was always organised by Marian Cocke, who was Elvis’s nurse for three to four years before he passed away,

“ It was amazing. I also got to meet Sam Phillips who was the special guest that year, Sam Phillips owned Sun Records and was the first person ever to record Elvis. I had written a song about Mr Presley that I got to perform as well, that was a very special moment.”

Dean also was the first Elvis in the world to receive the key to the city of Tupelo, the birthplace of Elvis Presley himself. Dean also received a guitar as a gift from the same hardware store that Elvis used.

Dean Vegas loves everything about the Fraser Coast and said, “ It is beautiful I find it so laid back, It reminds me of the Gold Coast maybe twenty-five to thirty years ago. I was only on the Fraser Coast a couple of months ago and was lucky enough to MC the All Abilities Ball and hang out on a boat whale watching with none other than Home and Away cast members Orpheus Pledger, and Scott Lee along with Model, Madeline Stuart, not a bad way to spend a Sunday.

“ We saw lots of whales, it really was a beautiful experience, if you haven’t done it I suggest that you do it”, Dean said.

On his upcoming show at the Hervey Bay, RSL Dean has a special message for his fans on the Fraser Coast, “You will have a wonderful night of memories, Elvis brings back good memories for many and inspires as well, remember always follow your dreams, don’t listen to people who try to shout you down, believe in yourself.”