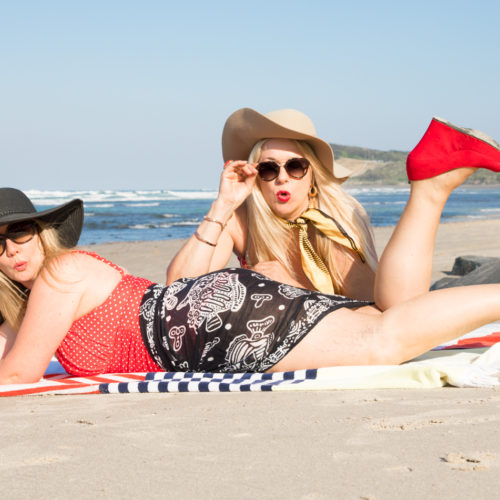 Comedians Mandy Nolan and Ellen Briggs find humour in life’s everyday moments, so much so that they are touring with their latest show, Women Like Us, described as being, ‘two hours of rapid fire, outrageously honest, delightfully irreverent comedy,’. I sat down and had a chat to Mandy to find out all about it. – Kim Parnell – Editor, What’s On Fraser Coast.

How long have you and Ellen known each other and where did the idea for, ‘Women Like Us’, come from?

I have been a comedian for thirty years, I also teach comedy. Ellen was one of my students and I got to know her very well, we are different but have many similarities. We get lots of work because we are unique. We found that there is a whole demographic of women out there going to various shows but not really being to relate.

With our show, Women Like Us, it resonates to a wide audience both male and female, I mean come on who hasn’t had a middle aged tantrum. As women most of us are always made to to feel like we just don’t measure up, that we are not good enough. Every day through everyday life we are being given the wrong message. So we have fun talking about the mundane topics like life, kids, family, school, and everything in-between. This is what we all live with.

How do you juggle a Career and family and still stay sane?

Well between Ellen and I we have seven children, five of which are mine. Oh, and while we are at it I have had three out of the four husbands too!. I only have two children at home now, the others have now grown up. You have to be really organised, we make our work fit around our homes as we love our family lives. Women are really great Strategists you know. Ellen and I are writing a book at the moment, we push each other and set deadlines.

As Comedians is there any subject that you will not touch?

No not really, but obviously if it isn’t funny I won’t go there as we want people to laugh. I tell some family stories but won’t tell others as they are very personal and besides my kids would kill me if I did. We talk about real things like the struggle of children and elderly parents. Most stuff is up for grabs, the trick is how you tell it.

Do you have any words of wisdom, or a quote for us on life?

Lots of stories, lots of laughter, adult themes. By the end of the show you will think that we have been living your lives. It honestly is a great night out. However we would not recommend that you attend if you have just had a hernia operation, a lady came to one of our shows once who had and laughed so hard during our show that she thought she had busted her stitches and would have to be readmitted!.

You have been to the Fraser Coast a couple of times now, what do you like about it?

We had a great reaction the first time we brought the show to the Fraser Coast, we hope that everyone has dementia this time so as they don’t remember seeing us the first time.

Apparently I lived in Scarness when I was two, This was before my father became an alcoholic and became abusive. So Scarness has a special place in my heart because it was a place of happiness, my father died when I was six. Other relatives of mine have lived around here to. we have a real family connection with the area as other family members have lived here over the years. Ellen has family in Hervey Bay as well.

Do you have a funny story to tell you us about being a parent?

When my middle daughter was 15 I had this running joke with her that if she kept her virginity until she was 16 I’d give her $50. Not much for a hymen, but it was a joke which she found amusing and loved telling her friends who then told their bemused sometimes shocked parents. One of them offered her another $200 if she made it to 18. And so all bets were on. At 17 and a half it was looking like my little capitalist was about to get her first pay out. Then she fell in love. But she was strong. Her new beau was keen to consummate, but she told him ‘Nope, I’ve got $250 riding on this.’ She made him go to the auto bank and withdraw the cash. I’ve never been prouder. It’s so great as a Mum to see your daughter really value herself.

As Ellen isn’t here to interview, what gossip can you tell me about her?

Ellen is the prude in our relationship, in photo shoots I will wear the big undies where as Ellen will wear a petticoat. She is cute, I think that it what makes us work. She also hates my driving and thinks that she is a really good driver. I will cross double lines to get a park, Ellen will freak out and tell me off as she always has to follow the rules.