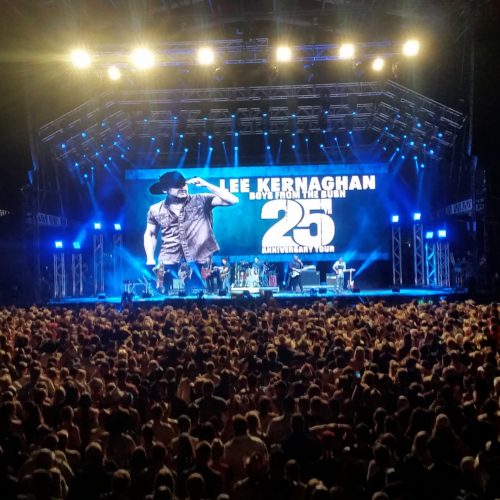 Australian Country Music Singer, Songwriter, Lee Kernaghan hits the Brolga Theatre in Maryborough this month with his, ‘Boys from the Bush 25th Anniversary Tour’. Lee is without a doubt one of our most decorated and recognised country music star’s in Australia today.

Lee, tell us about the – Boys from the Bush 25th Anniversary Tour?

The tour is all about the 25th Anniversary of the Outback Club. The first song on that album was called Boys from the Bush and was released in 1992. This album celebrates the milestone and features mates and musical hero’s.

I read that you have called South East Queensland home for about 20 years. What do you love about it, what makes you stay?

Although dad says I was born in Corryong, Victoria, I say I was conceived in Queensland. It is a great state and has inspired many songs throughout my musical career. There is a saying in the music industry, ‘The Cream always rises to the top’, this is what I tell all of my friends when they come to visit.

If you had not pursued music, what career would you have chosen?

As a kid I always wanted to be a teacher. I also had a dream of being an AFL football player. I am just lucky that I stuck to music lessons as it was the only thing that I was good at.

Spirit of the Anzacs– Tell me about reading those letters for the first time, what was it like?

I had visited the War Memorial to pay my respects as you do. I felt very privileged to be able to visit the archives while there and read some letters, some of them dating back to Gallipoli during the first World War. As I was reading the letters I heard the music through the words and it was right there in that moment that the album was born. It is still very special to me as it is to many people. As it turned out the Spirit of the Anzacs was the highest selling Australian Album for 2015. This album and the royalties belong to the Veterans.

Did you ever think way back at the beginning that you would be so successful?

I could never have imagined that the road would be so long and that the songs would resonate with so many people over the years. I am extremely grateful to the people of Australia, it has been and continues to be an incredible ride.

Have you been to the Fraser Coast before?

I have been a regular on the touring scene on the Fraser Coast over the years. It truly is a great destination, and such a beautiful spot.

I have done lots of Fund-raising Tours throughout this time. It began in the 90’s travelling through regional and remote parts of Australia. Over the years on the road we saw lots of hardship, We saw the effects of drought, and communities in crisis during floods or bush-fires. The towns would fund-raise, when we have concerts in these towns every dollar stays in that town, it is important to give back to the community and I definitely intend to keep doing this for life. Millions of dollars over the years has been raised for the bush and I am proud to be a part of that.

Who were your inspirations/ Idols growing up?

Slim Dusty for sure. My dad was also a huge inspiration to me growing up, Ray Kernaghan was also a country music artist inducted into the Australian Country Music Hands of Fame in 1981.

To the boys of the Outback Club, it is on – this is an AGM where everyone is invited. The show is going to be a big one.