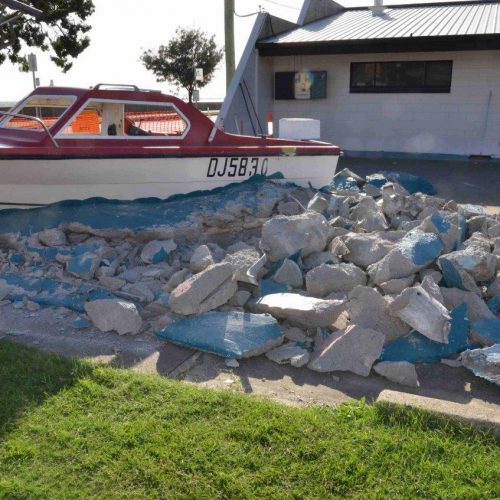 With the closing of the Vic Hislop Shark Show in 2016 the iconic shark display and boat outside was left to fend for itself.

It managed to survive unscathed until February 2018 when vandals attacked the two sharks, knocking out their teeth and smashing in the head of one of them. When Vic heard of this he decided to donate the display to the Historical Village & Museum in Zephyr St. for safe keeping.

Relocating the display was a mammoth exercise involving the FCRC and several local firms.

The original display weighed around 8 tons and unfortunately was not sufficiently reinforced to be able to move in one piece.

The first job was to cut away the damaged sharks for later restoration.

The FCRC helped by jackhammering the concrete away from the boat on the 14th March 2018.

They then removed all the broken concrete to the tip, clearing the way to lift the boat.

On the following day, March 15th, 2018, Form Direct / ReliableHire brought a large truck and Wide Bay Cranes brought a crane to lift the boat which now only weighed 2 ½ tons  (Inside the boat was still full of concrete). After a successful lift onto the truck, the boat was relocated to the rear of the Historical Village.

The original sharks will be restored and set in a new concrete base surrounding the boat which will be painted to resemble the sea and waves. A sea/sky backdrop will be painted and installed so that anyone taking pictures of their family in the boat will have a memory to treasure.