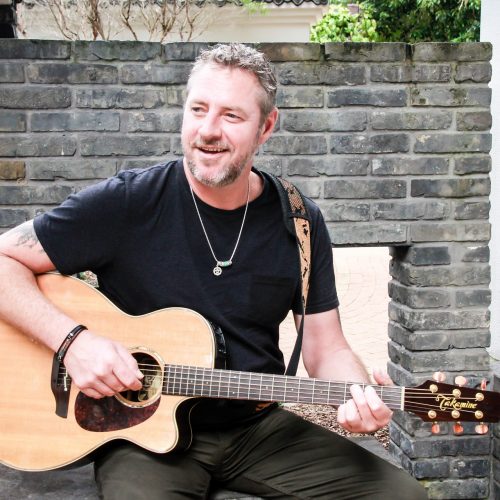 If you frequent the pubs and clubs on the Fraser Coast chances are you have heard of local musician Shaun Beckett in one form or another. I was lucky enough to sit down and have a conversation with him a couple of weeks ago about growing up, music and the future. To find out where Shaun is playing next turn to our Gig Guide. – Kim, Editor – What’s On Fraser Coast.

Tell us a bit about your childhood, who was your musical Inspiration?

I was born in Ferntree Gully in Victoria. I was the youngest of four, I have two sisters and an older brother. We are all quite a loving family and went on camping trips. We also had lots of family sing a longs as my family were from a Yorkshire background so there was lots of spoons and Ukuleles, and some pretty hilarious nights.

We moved to Hervey Bay in 78 so I was only about six or seven at the time. I loved growing up in Hervey Bay it was a very small place back then. We would bike ride, watch the train go past each morning, it was a very different place as we didn’t have the development that you see now. There was no traffic lights. There were lots of little spots that we could get into harmless mischief.

My musical inspiration came from my brothers and sisters. My brother was a mad sweet fan so I heard the Rebel Rouser and Ballroom Blitz lots of times. My sisters were crazy Abba fans so they would steal mums 70’s platform shoes and do dress-ups in the hallway. The 80’s were when music really started to dawn on me, and it came by the way of KISS and the music video era with videos like ‘video killed the radio star’, MTV and the Kenny Everett Video Show.

Do you write any of your own material?

It was always hard to complete a song sometimes you try to hard. You get a bit of a song and sometimes it can stay that way for years and then it just kinda drops off. Nowadays I find that there’s a window that I can use, and if I don’t get interrupted and am able to have that moment I can get something down and it just happens like that.

Songs relate to people in all different ways, It is nice when you can touch someone with a song. I wrote a song called ‘Fly in Fly Out Blues’ about people during the mining boom flying in and out and going through the blues. It brought this robust man to tears one day, the song really hit a nerve, he could relate to it. That is the biggest compliment I have had with one of my songs.

What can people expect if they come to watch you perform?

I think it depends on which format you see me in. If it is in the band, Bay City Rock, you will see our four piece rock band playing rock covers. It will be a night of rock and rifts.

I play in two Duo’s one being ‘Beckett Turner Overdrive’ with seasoned soloist, Dave Turner. We put together some nice harmonies.

Then there’s ‘Timber and Steel’ with young guitarist Kye Williams who brings the electric side to my solo stuff. This means we can have certain hooks and songs which I can’t quite do by myself.

Then there is just me, Shaun Beckett I think my forte is a cruisy afternoon Sunday sesh. I don’t like to jump down peoples throats with my solo stuff, I would rather allow people to choose to listen and I find I win people over by a song or two.

What would you like the next eight months to bring you?

A full calendar and an album would be great. This would be my first.

I have made many great friends through making music over the decades, I feel very fortunate. I also try to live a full life as it is not a rehearsal. One mistake we all make is thinking that you have time.