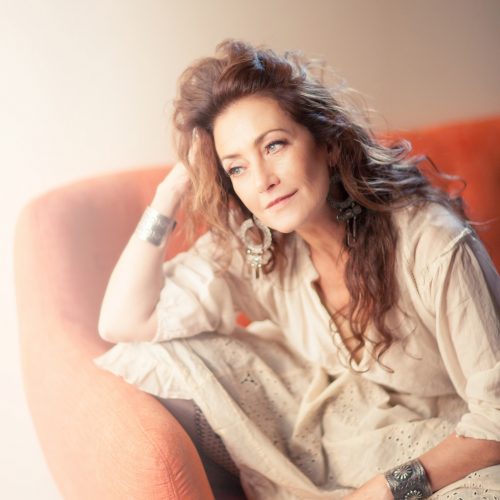 Wendy Matthews has a voice that captures the imagination, that makes you want to close your eyes and get carried away to another time and another place. The lyrics evoke memories, inspire, and make you reflect on life and love.

Wendy Matthews is an Australian-Canadian, Singer/Songwriter who was born in Canada, her parents were young and of the 60’s when they met each other in Art School. “ We had a country place on a lake, we had a very loving and tight family”, Wendy says.

The wonderful voices and expressions of women like Aretha Franklin and Patsy Cline filled the hallways growing up, and Wendy says, “ I remember when I got a Job I bought a Bonnie Raitt album and was so excited, they were great times”.

Wendy sung in her first band with friends at the age of fifteen, and later spent many years in LA as a backing singer. She has also sung with bands such as the Models and Absent Friends, and worked with Glenn Shorrock from the Little River Band. With decades of touring under her belt with the likes of Rod Stewart, Cher and Sarah Mclachlan, and a very successful solo career it would appear that Wendy has done it all.

Of the people and artists that she has met I asked Wendy who stood out, she says “ Everybody’s human, just because someone has made it musically doesn’t make them an exceptional person or get them into heaven.

You certainly get to observe a lot, and observe words or actions that then come back to them whether good or bad. Brian Ferry is a beautiful, quiet unbelievable man. He really struck me as someone that stands out”.

In 1992 the lead single, ‘The Day You Went Away’ was released from the album, ‘Lily’. Even though this song was not written by Wendy Matthews this song was a huge hit. It became the ‘Best Single’ and the ‘Highest selling single’ at the ARIA Awards in 1993. Of this song Wendy says, “ Obviously I am grateful for that song, but at the time it terrified me.

The record company decided to play it as an introduction to the album, I was scared as it was a really slow song. But it really cut through at the time. It is amazing that the same song can mean something different to so many people”.

In 2015 the album ‘Billie and Me-The Whiteroom Sessions’ was released. While this was not a studio album it became very popular. Wendy says, “ this album was basically a quick two days in a piano factory with the band, having fun, we were surprised at what was coming out.

After two days we realised that we had a whole album of Billie Holiday songs. I mixed a few of my own acoustically to add to the album too which is why the album is called Billie and Me”.

Of her many awards Wendy says, ‘Awards say that one persons work is better than the others, and I don’t agree with that.

I look at them as being for acceptance and encouragement and in that regard they are very special to me”.

When Wendy Matthews isn’t touring or performing she likes nothing better than to escape to her property near Coffs Harbour where she feels most comfortable, and admits to the fact that she doesn’t follow the music scene at all and never has, but when she listens to music it has to move her.

Wendy also enjoys the writing and creating process rather than actually performing and says that she finds it difficult to listen to herself singing.

Of her upcoming performance Wendy says, “ Well I have nine studio albums to choose from, my own gigs are very different. Whatever gig I am doing I like to get into the nature of it.

I hope that we all have a wonderful night together. I love the Fraser Coast and love to find the perfect breakfast spot with a view before we head back out on the road”.