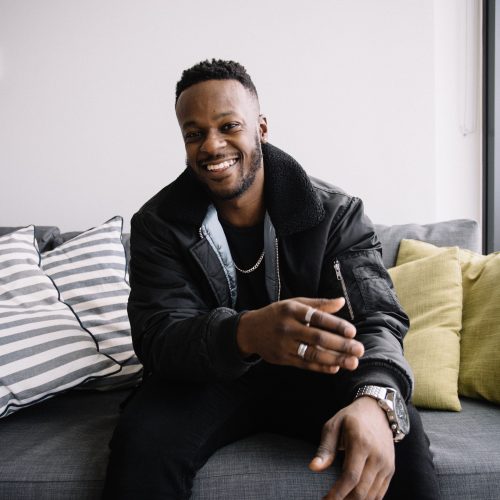 Timomatic fills the stage with his energy and vibe. He has a positive, fun presence that you can’t help but feel. You can tell that he adores performing and enjoys bringing the show to the people.

The multi-platinum artist had such a great time on the Fraser Coast as part of his regional tour last year that he has decided to head out on the road once again and visit places that he was unable to the first time, and that includes Hervey Bay.

Timomatic will be fully revived after recently holidaying in Los Angeles, this was his first decent holiday in two years and he said, “It was a great opportunity for me to get creative and to find some inspiration.

LA is a mecca for musical entertainment, and I find that there is a palpable energy that helps to get the creative juices flowing”.

Asked where Timomatic’s positive vibe comes from he says, “I honestly have a passion for people and what I do.

Being an African ethnic I like to shine the light on young guys like me that need inspiration. I would like to see the next Timomatic African American star and help him achieve his dream.

I take being a role model very seriously and never take it for granted. I grew up with a dream to perform and that dream came true”.

Soon we will get to see Timomatic on a regular basis on our TV screens as he has taken up a Judging gig on the much anticipated new series Dance Boss, Timomatic just knew that it was something that he wanted to do. Co-produced by Danni Minogue this show is bound to pack a punch.

Timomatic says, “This is a dance comp for everyday working people from nurses to McDonald’s employees and everything in between, It is absolutely incredible”.

Dance Boss is about different industries coming together, made up of people who have a passion for dance. The show is extremely relatable and made up of everyday people doing some pretty cool things. Best of all the series will feature some new music from the artist himself.

The next six months will see Timomatic take on a role in the new stage show called Madiba the Musical, a celebration of Nelson Mandela, this will be the first time that this musical will be performed in the English language,  running for approximately three months the show will travel to Sydney, Canberra, Melbourne, Auckland, Adelaide and Perth.

In his down time Timomatic loves nothing more than playing soccer.  He plays mixed, both indoors and outdoors every week when he is not on tour. In fact his team won their division title recently.

“Playing Soccer is like a breath of fresh air after being on tour and performing”. Timomatic says.

As our interview drew to a close I thought I would throw a fun question into the mix. I asked Timomatic which super power he wished that he possessed, Timomatic said that he, “would love the ability to be in two places at once so as he can work and play at exactly the same time”.

Timomatic says, “I can’t wait to see you all in Hervey Bay, we are going to have a lot of fun together as I put on a great show for all of you”.

Tickets are $30 per person
All guests under the age of 18 are required to be accompanied by an adult.
Tickets are available from the Gaming Room.
VIP tickets are sold online at: https://timomaticworld.com/