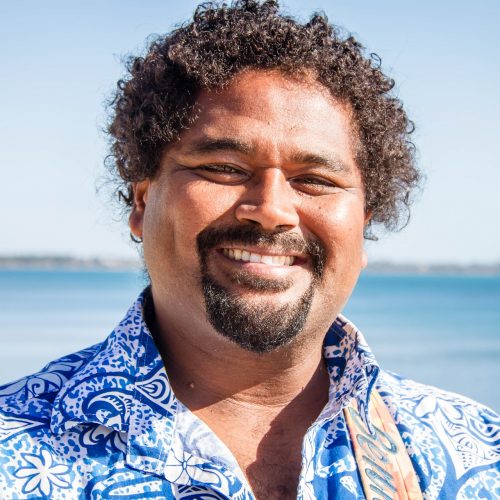 Local musician Frank Benn is very well known across the Fraser Coast. With his cool tones, huge smile and great melodies he certainly knows how to draw a crowd. Over a cup of coffee we talked about his childhood, music and dreams – Kim, Editor – What’s On Fraser Coast.

Tell us a bit about your childhood and who your musical inspiration was?

I was born in Fiji, Suava in 1983, but only lived there for six months. My parents took me to Auckland, New Zealand. We moved to Waiheke Island when I was about two years old, this is a half an hour boat trip from Auckland. I was on the island for about eighteen years.

The island is absolutely beautiful. Everybody knows everybody it is a really tight community  and  a great place to grow up.

All of my Fijian family were musical, my dad not so much. But if they didn’t sing they played the guitar. Or they were in a choir. Music has always been in my blood, and I knew at a very young age that this was what I wanted to do for a living.

What Genre of music do you play?

My style is a funky coasty kind of jazz blues, a bit of everything, but no one thing in particular.

What is your most memorable gig to date and why?

There have been so many good gigs but one of my most memorable gigs was being the opening act for the Black Sorrows in Ipswich it was a great experience, I got to sit in this green room with a bunch of talented Australian musicians that have been there and done that and are still doing it.  I got to play on all of this amazing sound gear as well, The Black Sorrows were great.

Do you write any of your own material?

I have written a lot of songs and recorded about thirty songs to date. Sometimes a song just comes to you, bang it just flows and sometimes I can be sitting down having a conversation and someone will say a word and it will just kick-start something. Usually, it is just an idea and then I will have a brainstorm and feed off that.

I always carry a little book with me to write down words and ideas in. Then I will bring a melody into it I think it just depends, it can be just a word or I will see a story on television and I will think that it is a really magical story that I could write a good heartfelt song about. I don’t always write from my point of view, but I sometimes do perspective writing, I will write about what I think the subject is going through.

There is a particular song I wrote about my brother in Law Mitchi that song is called ‘Other side’ and is on my latest album, it is written from what I would believe would be his point of view.

I have done three albums in Australia, two with the band Chops. One called ‘Chops Raw’, then my most recent called ‘The Frank Benn Trio’, and in-between those two albums an Independent album called ‘Visual Images’ that I recorded in Gympie.

What can people expect if they come to see you perform?

The guitar is an instrument that you can carry with you no matter where you go. You can create melodies as well as keeping your baseline all in one. There is just something about the guitar. I would almost say that it is my form of meditation, in those three or so minutes that you are playing a song you just kind of forget about everything else, it all makes sense while you are playing.

What is your dream for the future?

I would like to be known as an original artist, and for something other that Brown Eyed Girl, (laughs). I would also like to do more opening support acts for national or international artists. Doing a lot more festivals both here and out of town would top it all off nicely.