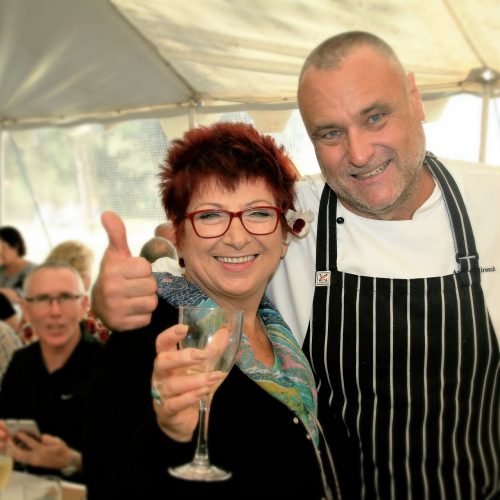 Hervey Bay Seafood Festival celebrates its twenty -year anniversary with Australia’s biggest seafood picnic. The biggest picnic in the park- a  seafood birthday party is happening at the annual Hervey Bay Seafood Festival on Sunday August 12. Fishermen’s Park at the Urangan Harbour will be transformed into a sea of seafood to celebrate the occasion.

Event coordinator, Elaine Lewthwaite said, “To celebrate, we have gone back to our heritage in seafood – and to the festival roots to tell the story of the local wild catch seafood that spans generations of local fishing families and acknowledge, the achievements of volunteers and supporters who have made the multi award-winning festival a significant event for Queensland.

We also want to thank the seafood lovers who have travelled this journey with festival organisers and stallholders”.

Elaine said, “Since 1998 hundreds of thousands of seafood lovers have attended the festival and half of these have travelled from outside the Fraser Coast – and this year is shaping up to again draw thousands of visitors with  bookings from all states”.

The festival is organised by the commercial fishing families and friends from the local community. Hervey Bay Seafood Inc was formed in 1998 to promote the local wild catch seafood and create awareness of the role of commercial fishing in coastal communities. The local wild catch seafood industry is based at Urangan Harbour and supplies exceptional seafood to local restaurants and throughout Australia.

The festival will be officially opened by Hon Mark Furner, Minister for Agricultural Development and Fisheries. The Minister will also be launching the exciting new promotional brand Wide Bay Wild Catch that the seafood industry has been developing over the past couple of years. Designed to tell the story of seafood in this region from Gympie to Bundaberg, Wide Bay Wild Catch will also have a standalone pavilion with all the information from catch to plate.

There will be over twenty specialised local seafood stalls presenting dishes featuring local heroes of the local wild catch from fish, prawns, bugs, and the world-famous Hervey Bay scallops. Festival-goers have a bevy of new dishes to try and with a bumper scallop season, there is a variety of scallop dishes including cauliflower panna cotta with caramelised scallops,  as well as favourites like fisherman’s basket filled with whiting, king prawns, and the ginger & lime scallop rolls.

Making their first trip to the Fraser Coast are  2018 Masterchef contestants Jo Kendray and Aldo Ortado with their own pop up featuring dishes from their time in the kitchen. Festival goers too will be able to chat with Jo and Aldo at the  Fisherman’s Kitchen cooking marquee and find out just what it really is like on Masterchef and what was it like to cook for Nigella and Gordon Ramsey.

Javier Codina of Moda Restaurant Brisbane and Professor Daryl McPhee (Bond Uni) have a program of seafood and science cooking to keep the crowd enthralled all day.

The new-look layout has a designed market and exhibit area – Fisherman’s Wharf Fair takes festival-goers for some browsing and buying with views to the Great Sandy Strait and Fraser Island.

Relax with regional wine or rock to a top line up of music by local producer, Rob Mackay. Music for all tastes with Golden Guitar winner Brad Butcher and Michael Waugh and some serious park dancing with the Rockin Colt Seaver Band.

Haighs Jewellers of Pialba have donated a magnificent original hand-crafted pearl necklace that will be won by a lucky gate ticket holder.

For more information go to www.herveybayseafoodfestival.com.au

Tickets at the gate