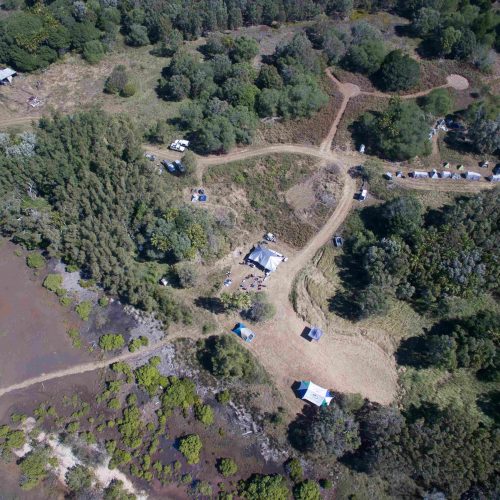 From the 31st of July to the 4th of August, Butchulla Men’s Business will conduct their second Rites of Passage ceremony in 200 years.  Twenty boys from four local high schools and their significant male role models will attend the coming of age ceremony on the saltpans of Maaroom in Poona National Park.

The resurgence of this ancient process came about when Butchulla Men’s Business members sat around a fire discussing their concerns for male youth of the Fraser Coast region.  They all concluded that missing from a boy’s life was a guided, mentored transition to manhood and that men needed to step up to make this happen for their community. In 2018 after 3 years of periodical meetings, their dream became a reality.  Butchulla Elder Uncle Glen Miller enrolled the help of Dr. Arne Rubinstein from the Rites of Passage Institute and 7 local men to form what is now known as “Bubbinyuwi Wanda”, Father and Son Climbing in Butchulla language.

Led by Uncle Glen Miller – Brad Crosbie and Mick Smith from WYLD Projects, Tom Mackinnon from QLD Police, Rod Macdonald from Queensland Ambulance Service, Troy Johnson and Gerard Bauwens from Education Queensland and Dustyn Currie – Butchulla Cultural Heritage Expert,  are again working tirelessly to formally recognise the transition from Boys to Young Men for 2019.  And this year they will attempt two camps, the next happening in September.

CEO Dr. Arne Rubinstein is passionate about this work with our local Aboriginal Community and will again be attending this year’s camps.  Uncle Glen Miller has stated that “over the coming years, we will make this process ours by embedding more Butchulla Perspectives and we hope that our neighbouring communities will do the same.  Our idea is to recreate broken songlines”.