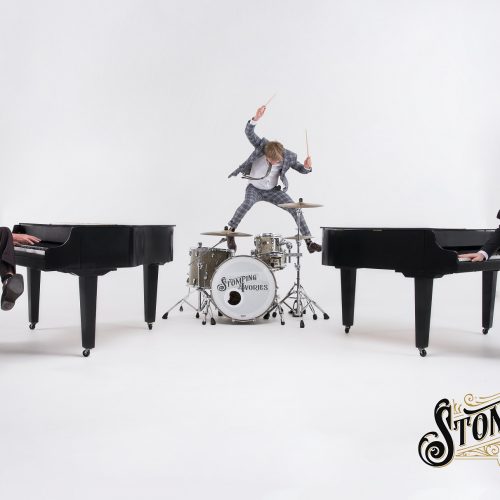 Murray Sheridan – on Drums and Vocal

Greg Agar and Hugh Murry on Piano and vocals

I often feel privileged having the opportunity to interview or have a conversation with some of our most talented musicians, and Hugh Murry was no exception. He took me to New Orleans, and to Nashville as we talked about music, history and the Stomping Ivories … a show that you won’t want to miss! Kim Parnell

Tell us a little about the background of Stomping Ivories, how did the band form?

The Stomping Ivories formed quite organically. I had been on tour in America with a band of mine and we played a couple of times in New Orleans we ended up in a venue called Pat O’ Brien’s which is where the two pianos thing started back in the 1930s. This was where the idea came from.

Greg Agar and Murry Sheridan were the first to tour with me, the show took us to old halls and theatres in regional areas. Eventually, Greg got signed to Sony and we went our separate ways for a while. We had so much fun doing the show though that four years later we got back together.

What kind of music do you play?

Our catchphrase in the past has been Geswin and the Gaga but we play anything from classic Elton John to Honky Tonk, New Orleans and INXS. We also do ‘Bohemian Rhapsody’.

Depending on the gig people may be able to ask for requests. The big part of the fun with this is that our song list covers about 500 songs, so we never know exactly what’s going to happen. The shows are always structured enough – though we ensure that there is enough room for us to move. It makes each show have spontaneous energy.

As a singer-songwriter, you have co-written songs for Keith Urban and INXS to name a few. Tell us a little about the experience?

I was based in and out of Nashville for about ten years and I was managed by Greg Shaw, another Brisbane boy. So, Keith and I were managed by the same guy, at the same time. We all hung out at Nashville together.

I did some recording with ‘The Ranch’, Keith’s band when he was first on Capitol in Nashville. We wrote a song together called ‘Yeah She Does’, the song was recorded by a couple of artists both in Nashville and in Australia.

Keith is very talented, seeing him on the guitar early on made me realise you have to get your shit together as a musician.

I have also worked with Kirk Pengilly from INXS, among other things we co-wrote an album together.

Greg Agar has a long list of achievements as well. He is an ARIA award winner and also co-wrote a song called ‘Hey Baby Doll’ that Al Pacino ended up singing in the movie ‘Danny Collins’.

Murry Sheridan has also won an ARIA for his work as a drummer he has worked with The Vines and Christine Anu among many others.

I like a really strong song title idea; it then becomes a bit like a crossword where musically and lyrically you are filling in the pieces to bring the title alive. It gives me something to work towards, to make the title punch and make sense to whoever is singing it.

What can people expect if they come to see your show?

I am very excited as I have never been to Hervey Bay before.

Our show is an inclusive show. We try to encourage people to sing along, at times it can appear intimate depending on what we are singing. It is a bit like hanging out in New Orleans and having a big night out. We have a great night on stage and those in the audience will have a great night too. So, come along for a spontaneous singalong.

I hear that you love gardening, what’s the appeal?

(Laughter), I love hedges I have a bit of a hedge fetish …it began when I was in Nashville. Now I have a farm on the mid-north coast of NSW, If I need some space in my head I will go out and prune the hedges.