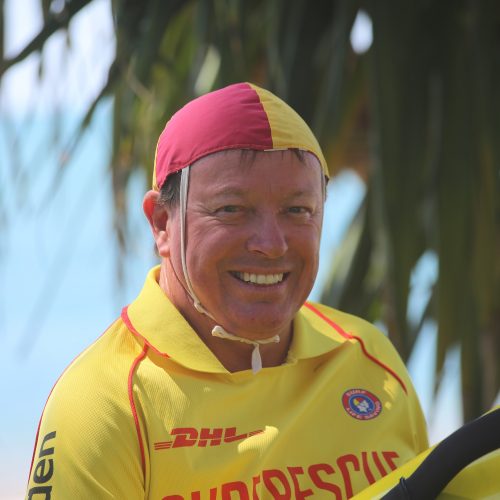 Ron Thomas is definitely one of the stalwarts of the Hervey Bay Surf Life Saving Club. His time on Hervey Bay beaches has been well documented – as I look through his much-thumbed photo album. There are many newspaper clippings and photos of a bronzed Ron in nothing but his speedos. Very rarely standing still but always on the move.

At fifty-eight, he still has that charm, with his huge smile and warm personality you get the impression that he would be a fun person to be around, a great mate!

Like many parents, Ron became involved in Surf Life Saving after his daughter joined as a Nipper.

Parent involvement is encouraged, so not long after he decided to become involved himself by gaining his Bronze Medallion and progressing through the ranks from thereon.

In fact, all of Ron’s children have grown up at the Hervey Bay Surf Life Saving Club, long before it was actually a club, and now the third generation of lifesavers is coming through with a grandson who has just started Green Cappers in Bundaberg as of last season.

Ron says, “ When I first started surf lifesaving we had a backboard for someone injured, our rescue board and a first aid kit – and that’s all we had, we would sit under the trees, now the volunteers have progressed to a fully self-sufficient risk-based compliant site. There is a lot more management now and it is a lot more professional.”

At the club level, Ron acts as the safety advisor for the committee. While on the beach he is a Patrol Captain who delegates jobs to the patrol members and organise’s the guys and girls for their shift.

“One of the things that people aren’t really fully aware of is that we have a tidal rip in Hervey Bay, we have a  gutter about 60 metres off the shore that will rush in and out with the tide, some times kids can get caught up and swept up or down the beach – so stay vigilant,” says Ron.

“Last season I was doing some lifeguard training. It was winter, the water was nice and flat and there were Dolphins. A lady had stopped halfway down the beach and squatted down to talk to her three year old, meanwhile, the 18-month-old had continued to toddle down to the water’s edge. In this instance, it was just a little beach dumper but enough for the little girl to go to her knees then the next dumper put her on her backside. When I got to the girl she had been sucked out a good metre and her mum didn’t even realise what had happened.”

Patrols run from September to May including all public holidays; It is the luck of the draw whether you are volunteering on Christmas Day or Boxing Day, Ron has done a few Christmas Days and every Boxing Day’s – he said with a laugh. Our patrol might have some cake, or we might all bring a plate to share sometimes we might cook up a BBQ at the end of the patrol.

People on the beach might also bring you plates of prawns or other Christmas fare.

Things to remember before hitting the beach:

If you would like to know more about the Hervey Bay Surf Life Saving Club go to www.herveybaysurfclub.com.au