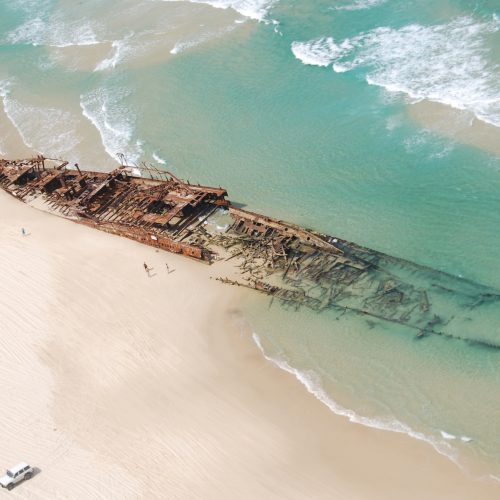 As we slowly wake from lock-down and begin to venture from our homes to try to regain some sort of normality, The Maheno wreck is beginning to see a steady flow of visitors again as Fraser Island is gradually re-opened. It would be easy to think that the last couple of months of solitude, rusting alone on the deserted eastern beach would be the quietest in the ships entire 115-year history. The truth is though, the Maheno would spend an accumulated 6 years of her commercial service languishing at anchor, Laid-up and mothballed, bogged down in economic depression and industrial dispute. Decks I have always envisioned full of passengers in their Edwardian finery were in-fact quiet for years at a time, but for the echo of a lone nightwatchman’s footsteps.

As words like recession and even depression circulate in the back of our psyche, it was indeed the great depression of 1929 that inevitably sealed Maheno’s fate. Government stimulus in the UK saw new shipbuilding continue even though trade had dropped dramatically and soon a whole new class of liners appeared in Australian waters. These new leviathans sported swimming pools and private bathrooms, leaving the antiquated Maheno outdated, and outclassed.

Laid up in Port Chalmers for over 18 months prior, The Maheno was given one last hoorah when she was re-commissioned for a special service in late 1934 to coincide with the Victorian centenary celebrations. By early 1935 the service was withdrawn along with the heavy government subsidy and the Maheno offered up for sale.

The ship was of very little value, and shipbrokers Banks Bro’s of Sydney scouted the scrap merchants of Japan (also heavily governmentally subsidised) in the hope of a quick sale. Myachi Kiessen K.K of Kobe would eventually purchase the vessel, having successfully scrapped many aging Union Steamship Company vessels in the few years prior. This would be the first time the company would attempt to tow a ship back to Japan however, with all previous vessels making the 6800km journey under their own steam. The aging union liner Oonah was also purchased as tow ship for what should have been a straightforward journey through calm waters.

In weather that also parallels predictions for this winter, unseasonal tropical lows lashed the Australian east coast in June/July of 1935.  I often feel for Captain Tanaka (and expedition leader Captain Hashimoto aboard the Oonah) and the dread they must have felt while looking out at the black circling horizon as their barometers crashed, realizing the peril of their hopelessly underpowered convoy.

July 9th will mark 85 years since the Maheno gently bumped ashore in her current position and I would usually be madly organizing the latest 5-year periodical exhibitions I hold of my artefact and photo collection, but given the 3000+ ( mostly older) visitors we had in 2015, it would be irresponsible to press ahead in these uncertain times.

I will continue lobbying local Government to establish a permanent Maritime Museum for the Fraser/Cooloola Coast, which might seem trivial in a time of economic uncertainty, but I believe new tourism ventures will be an important part of getting people back to our beautiful region and what better way than connecting with our rich (and often tumultuous) relationship with the sea.

You can read more about our famous wrecks fascinating history in my book ‘The Long Life and Slow Death of the T.S.S Maheno’ available directly from us at    https://mahenoguy.ecwid.com