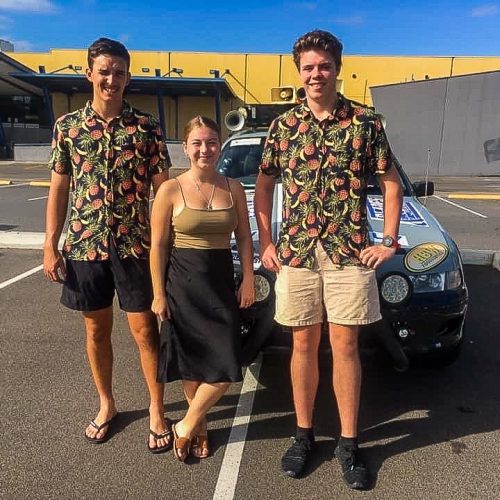 By Mitchell, Summer and Jake –

#44 Derbydore has been part of the Dunga Derby community since the events second year in 2016. Derbydore was purchased for two cartons of beer by original owners Ross and Bec. In the first year, Ross took two staff members from Auto Electrical Solutions (AES).

The car has evolved each year from a near-stock commodore to what it is today. She has gone on many recce’s, finishing every event – although a few minor roadside repairs have been made along the way.

The second-year the team members were Ross, Bec, and Chow. In its third year, Ross and Chow decided to donate time away from Derbydore to become part of the mechanical team, better known as the Greased Monkeys, who were on standby to help stranded dungas. Now it was time for Bec, along with new team members Simone and Darryl to take over for the next two years.

The car and its team are very well known for their fund-raising abilities, having raised over tens of thousands of dollars over its time for the Dunga Derby by Rally for a Cause. Some of its previous fund-raising events have included its legendary Bunnings sausage sizzle drive-thru and various movie nights.

Now that Ross and Bec have moved onto bigger projects it was time to pass #44 Derbydore onto someone else. The car has now been passed to the next generation of Dungarians, Mitchell and his team, Summer and Jake, who are an enthusiastic group of young adults very keen to continue #44 Derbydore’s legacy in helping Fraser Coast families through difficult times.

I would like to share with you a little about why I, (Mitchell) and my team have decided to join the Dunga Derby.

The Dunga Derby is a good way to make new friends and to have a blast whilst driving through small towns and putting smiles on people’s faces. So much is given back to the community, this is what really lured my team to join Dunga Derby by Rally for a Cause in the first place.

The experience has also been a family thing since that first year in 2015. Both my parents have been part of the dunga community for much longer than myself. I was not quite old enough at the time to go on all the adventures at that time.

Over the years I have heard all of the wonderful and funny stories about how awesome the experience was. I have also seen all the photos of everyone having fun and heard the various family’s stories on how Rally for a Cause has helped them in their times of need.

Now it’s time for myself and my team to create some of our own memories to look back and to cherish over the coming years. Being a young and new team in the event, I am very excited to raise funds that go towards helping out the community that I have been part of for most of my life.