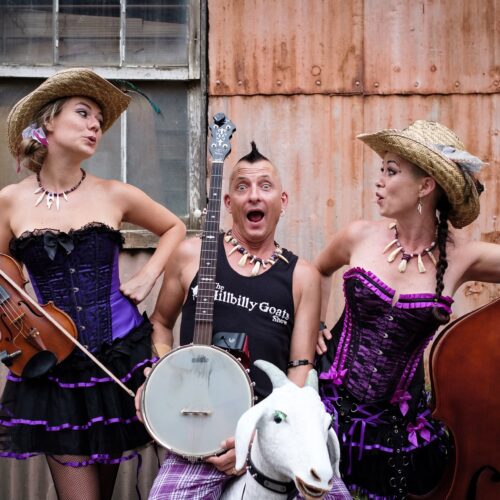 If you have ever attended an event with live music on the Fraser Coast, chances are you have heard The Hillbilly Goats perform. They are very different from any other act with their old-time mountain music, jaw-dropping stage presence, and a fantastic vibe that gets your toe tapping every time.

I had a chat with them recently and asked about their music, and about the much-anticipated LIVE show coming up in September.

Tell a little about The Hillbilly Goats?

We are a 3pce “show” band specialising in old-time mountain music.  Featuring traditional “Appalachian” folk music combined with tap dancing, bones, big harmonies, regular instrument changes, and plenty of stories on how the music was created by the Scots-Irish immigrant’s fiddle tunes mixing with the African banjo hundreds of years ago.

The musical twist on traditional songs The Hillbilly Goats are renowned for with big harmonies and a heavy presence of hard fiddle and fast harmonica have seen them carving their own niche at major festivals across the country.

Who makes up the band?

Fiddle players – we have 3 awesome fiddle playin’ backing vocal gals that share the role so that we can tour as much as possible… so they take turns on the road with us.

This year the band were winners of the Golden Fiddle Award and were also the Golden Guitar Finalists for “Bleed Me Dry”, by Bluegrass Recording. How did these two achievements come about?

We are lucky enough to have received 4 Golden Guitar nominations in the last 5 years and it’s an absolute honour to be recognised for our hard work, commitment, and dedication to the show.  We believe that years of relentless touring has spread our reputation throughout the nation and it’s the love and thanks we receive from our fans that fuels our progression.  The Golden Fiddle Awards are a big deal each year in Tamworth and we were invited to be a part of this year’s celebrations and were just amazed when they declared us “Best Band with a Fiddle” for Tamworth!

How many albums do you have out?

We have 4 albums specialising in Mountain Music and there is a whole lot of history on the songs and the evolution of the music inside the CD covers.  Most of our tunes are our own arrangements of traditional folk songs amongst a handful of originals…  keeping the story of the old-time music alive is our passion.

Tell us about some of the more unusual percussive instruments that you play?

Goat Girl plays double bones made from the ribcage of a cow.  This is one of the oldest instruments in the world dating back to the Ancient Egyptians.  It’s literally 2 rib bones in each hand played castanet style and can be compared to the spoons.  Oh, and she has taps on her boots so clogging steps form part of the percussion onstage.  Goat Boy tapes sewing thimbles to his banjo strumming hand and in between strums he hits cymbals and scrapes a washboard.  He actually plays banjo, harmonica, and drums altogether at the same time!

Where are some of the more exciting places that you have performed, and what have been some of the gig highlights?

We play clubs and festivals most weekends in all parts of Australia and some of our larger festivals include Tamworth, Gympie Muster, Airlie Beach Festival, Woodford Folk, Port Fairy, and Groundwater Country on Broadbeach.  We also have been a part of the Cruisin Country Family since 2016 and travel to the South Pacific on a cruise ship with Australia’s Biggest Stars of Country entertaining thousands of fans aboard the Royal Caribbean.  We’re also lucky enough to be involved with Travelrite Music Tours so we’ve taken fans on a 2week NZ tour as well as Tasmania, Adelaide, and Kangaroo Island…. we’re also hosting a USA Music Tour of the Deep South for 47 of our fans.  That’s a 21-night tour down the East Coast including iconic music cities such as New York, Nashville, New Orleans, Memphis, and heaps more… That tour is postponed to October 2021 due to travel restrictions at this time.

You guys even launched your own music event last year and will be running your second event in September. What can people expect?

That’s right – it’s called “The GAS” – Goats Acoustic Sessions and is a 3-day camping event for music lovers.  Sep 25-27th.  We used to live in FNQ and were partners in a very successful event up there that we ran for 7 years so we’ve had some practice. We ultimately wanted to create this one on our own and on our own property so that we can open our place to our fans and share some great acoustic musicians with you all.  We ensure that it’s a low volume, intimate bush concert and that all acts are high calibre touring artists with a big emphasis on “entertainment”.  No specific genre – just a lot of fun and quirk.  We’re all about engaging with the audience and keep our tickets limited so that everyone can have an intimate and up-close experience.

Tell us more about the event. How do people get tickets?

It’s set on 86 acres just off the Maryborough-Biggenden Rd at Brooweena, and we’ve built a sound shell with off-grid solar.  With food stalls, market stalls, hot bush showers, portaloos and a dump point it’s a great camping weekend with the bonus of national touring festival artists playing in your backyard.  … We open the gates to campers from 3pm Thursday so that you can settle in and set up camp before the music begins at Sundown on Friday.  Guests are also welcome to stay Sunday night and join in a bit of trivia fun (Rock Quiz) with the musicians.

Tickets are limited to 250 and are available on trybooking – www.trybooking.com/BGXOE.

To find out more you can contact us on: