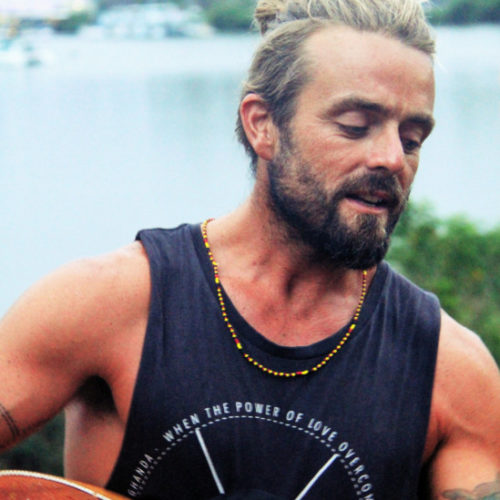 As my companion and I  walk through the stage doors of the Brolga Theatre to meet Xavier Rudd for the first time I ponder at the fact that a few short weeks ago I had no idea who Xavier Rudd was until his concert details passed through my news-feed. I shared the post to let people know what was coming up,  the response left me in no doubt that I needed to find out all about this Musician. Yes folks,  Xavier mania had hit the Fraser Coast.

The Musician had been rehearsing all afternoon and stopped long enough to meet us for about seven minutes. He entered the room with his wild long blond dreadlocks which he quickly put up with a hair-band for a few photos. He was barefooted and dressed in a singlet and shorts. We shook hands and kissed, my friend who was accompanying me nearly swooned as the gentle mist of rain fell over the Mary River and the sky darkened, not the most ideal time to be taking photos.

As I was moving around Xavier with my camera at the ready I jokingly requested that he sing us a song as I am photographing him. So he did, right there with his guitar next to the Mary River.

All I can see when I think about that seven minutes is his huge smile, perfect teeth and the most amazing penetrating eyes that I have ever seen.

Those who were lucky enough to see Xavier Rudd on stage a few weeks ago certainly were not disappointed. From the opening chord he had us all spellbound. The sensory experience was Tribal, Psychedelic, soulful, trance like, colourful,  and earthy.

The theatre was charged with emotion as people laughed, cried, sung and hugged. At times I don’t think that there was a dry eye in the house, Everybody in that room was united as one and we were all feeling the love, we  were all treated to the full Xavier Rudd experience that night.

Xavier Rudd was born on May 29, 1978 and was one of seven children, he grew up near Torquay in Victoria. He is an Australian singer-songwriter and multi-instrumentalist. Xavier sings songs across many subjects that quite often have a socially conscious theme, and believes in the rights of Aboriginal people, (His father was born with Aboriginal, Irish, and Scottish heritage, and has Wurundjeri background). Xavier is a very spiritual person with a big heart and loves nature and the environment he wants to do all he can to protect it.  Xavier does this through his words and music and makes us all aware of the causes close to his heart.

His music had taken him all around the world, he played sell-out tours in 2016 in places like Amsterdam, Vienna, London, Barcelona, Milan, Cologne and Bristol.

Xavier Rudd has shone the spotlight on many organisations like the Sea Shepherd Conservation Society, Surf for life, and Waves of Hope. He has also worked with other volunteers in building a high school in Nicaragua in 2013. Other than his Humanitarian work Xavier has also been outspoken on several issues that he feels passionate about.

In his spare time Xavier is a keen surfer and indeed has surfed all over the world. It has been said that surfing inspires his music. Another one of his favourite pastimes is snowboarding.

In fact, I was told by his Tour Manager that Xavier had driven himself alone in his Jeep through Noosa and on the Beach on his way to perform for us on the Fraser Coast. He made frequent stops to surf and be at one with nature.

Goomblar Wylo is well known around Hervey Bay as our Police Liaison Officer. He spent two weeks training at the Police Academy to prepare himself for the role of assisting the police with cultural matters and was also the driving force behind Xavier’s visit to the Fraser Coast.

I asked Goomblar how he knew Xavier and he answered, “  I first met Xavier Rudd about twelve years ago in Reunion Island near Madagascar. He was singing at a festival, and I was playing the Didgeridoo for him, we have been friends ever since”.

Well of course his response took our conversation to places that I have only dreamed about as Goomblar talked about his past as one of the most seasoned Internationally travelled Indigenous Artists to-date. Goomblar has an impressive history in the Arts. He worked with the ‘Descendance Aboriginal Dance Theatre’ directed by Jose Calarco, throughout his early career and has also has had a great solo career.

He has played at many Corporate events throughout the world like Seoul, Korea. Been part of a television Documentary narrated by Russell Crowe, toured Hong Kong, then Canada in 2016 with Xavier Rudd, he has also toured Hungary, Vienna, Russia, Japan and Opened the Moscow Circus performing at the Bolshoi Theatre. In 2005 Goomblar even had a film script written about his life by Australian writer Mark Fitzpatrick. He was the face of the 2000 Olympic Games in Sydney for its coverage in Germany and  Europe. And was the first-ever Aboriginal artist to tour Poland.

When asked why he doesn’t perform any more Goomblar said, “When you are an artist you do not get paid super, I was bringing up a family and needed to get a normal Job. When I played as an artist I gave it my all, hopefully, when I retire I will go back to what I love best which is performing”.

Goomblar contacted Xavier as he wanted to organise a concert to raise awareness and funds to go towards domestic violence and women’s health targeted at Indigenous woman & the community. He started talking about the concert two years ago, then locked in a date with Xavier and set the ball rolling.

Goomblar was born in the Aboriginal settlement Cherborg near Kingaroy in Queensland. He was forcefully removed from his family at the age of four and spent time in Parkhurst Boys Home until he was about ten years old, he was then transferred to Boys Town.

Goomblar has now been married for twenty-seven years to Abina. The couple has known each other since they were thirteen, and have six children with the oldest being thirty years of age.

The name Goomblar comes from his great grandparents and means eyes, as he looks into mine and tells me all about my ailments, and he is pretty spot on.

He is also well known for his humanitarian projects from working with homeless children. To working with prison inmates in some of the harshest prisons.

Goomblar’s advice is simple, he wants us to, “ Have the ability to change the way we are thinking”. He talks to me about changing your mindset, doing something with your life, overcoming the odds and remembering that anything really is possible.

Goomblar really is a remarkable man.