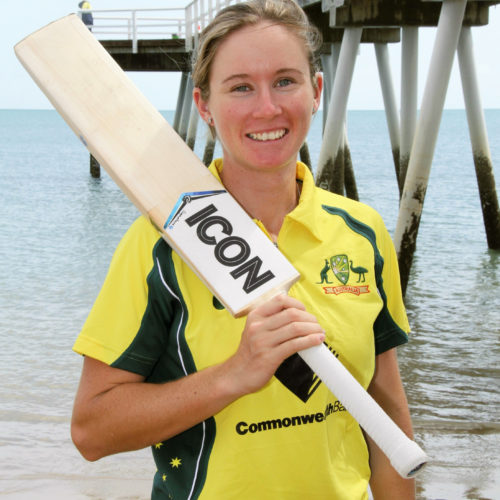 I was born in Shepparton, Victoria in 1994. My family and I moved up to Hervey Bay when I was 10. Hervey Bay was pretty cool growing up, I went to Star of the Sea. Followed by Xavier College and found that you get more opportunities to learn and play sport and do different things when you are in a smaller environment.

Dad and I used to ride our bikes along the Esplanade early in the morning before school, we would also Kayak out on the water, at the time we had another dog named Jasper and we would put him on the front and go Kayaking for a couple of hours which was really cool, just the vibe I think is what makes coming back so nice.

When I started out I tried out for the Hervey Bay Zone Trials but had never wicket kept or anything before but I was the best catcher in the team so the coach at the time Richard Dugdale said why don’t you try wicket-keeping for us, I said yeah great and then went to the State Championships. After that I made the Queensland Primary School girls team and it went from there, I decided then that this was what I wanted to do. I was about 13 at the time and the current Queensland Coach Andy Richards from Hervey Bay actually said to me that I would play for Australia. I don’t know how he worked that out when I was that age but he did and I am so glad that he was right.

I just loved the team environment in Cricket and then obviously as I started to make a few more teams I made some really good friends. I think that is what has kept me in the game is the friendships that I created, and I always looked forward to going to Brisbane and missing a few days of school and catching up with my really good friends on my team. I think that is probably what helped me, having good people on your team makes a massive difference I think.

When I have time off I like to spend it with my Border Collie, Ruby. I do a bit of road cycling as well, Oh and I am a bit of a coffee snob so I like to find new cafes down in Brisbane and catch up with my mates from cricket and away from cricket. I just like being able to relax and just get away from cricket for a bit and to go on adventures.

In my Cricketing Career I play for Queensland on the one day side and the Brisbane Heats T20 side, so WBBL and I play for Australia. My biggest achievement to date would be when I was part of the first Queensland T20 team to win the title which was pretty cool and I was lucky enough to get to Captain that, that has probably been one of my favourite memories along with obviously debuting for Australia, that was right up there as well that was a bit of a dream come true, and of course I scored my first 100 for Australia a couple of weeks ago. This felt pretty surreal because I didn’t have a very good T20 series a week or so before that so I couldn’t buy a run basically and then
to go out and be a consistent performer in the one day side and nail that opening position was pretty cool.

My advice to any Junior trying to get into the game is to enjoy the opportunity’s that you get given but at the same time embrace the friendships that you create and if you look at it like that you will probably play a little bit longer and more successfully than some people.

I am having a holiday in a few weeks on the Whitsundays before I go back to Brisbane for the world cup prep, we have a few camps before the world cup in England in June. I would really like to play in all the games in the world cup if I get picked, and hopefully help us to win it. So a busy year ahead.