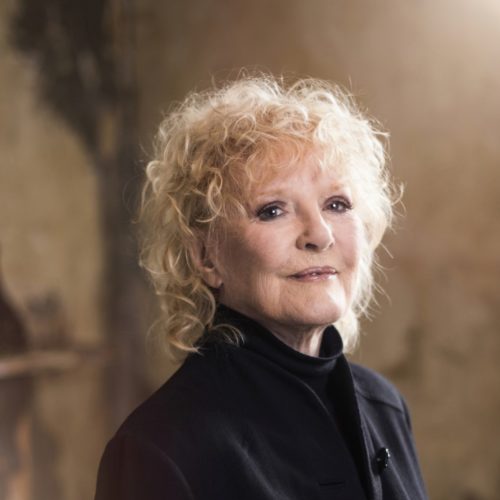 Before receiving the media call from legendary film and theatre music star Petula Clark, I admit that I was a little nervous after all she is known as the First Lady of British Music, happens to be a two time Grammy Award Winner and has sold nearly 70 million records throughout her career. Petula has danced with Fred Astaire, appeared on American Variety TV programs hosted by the likes of Ed Sullivan and Dean Martin, has had lead roles in musicals, and has been honoured by Queen Elizabeth II by being made a Commander of the Order of the British Empire, and believe me this synopsis doesn’t even scratch the surface.

When I nervously answer the phone and the Operator connects us, the first thing that Petula says is, “I am delighted to speak to you Kim.” For a moment I am floored and then I regain my composure. Such politeness seems to go by the wayside so often these days. Petula has the art of making each person she talks to feel so important, and also has a great knack of putting people at ease.

Another thing that struck me was her voice, at eighty five years old this year, her voice definitely belies her age she sounds so upbeat, alive and very young. Petula giggles like a schoolgirl several times throughout the conversation, and I don’t mind saying that I am in awe. It was a conversation that I did not want to end as I could have asked a thousand questions.

By the time that you all read this article Petula Clark would have performed in her Concert at the Brolga Theatre. Below is our phone conversation recorded a few weeks before her show.

What was it like performing on the Dean Martin Show?

I had a special relationship with Dean, he was very talented but he was never at rehearsals as he was always off playing golf. He would turn up and have no idea of what was going on. He always had to read the cue cards and be led around. They were wonderful times. All of my clothes were made for me as the seamstress knew all my measurements, it was a lot of fun. I also did shows with Andy Williams, Bob Hope and many others.

Is there anything career wise that you would like to do or that you have always dreamed of?

I have never dreamed or had any ambition about what I do, I just do it. I started singing because I truly enjoyed it. I am very lucky as things just come to me and happen in my life.

Do you still get nervous before a performance?

I am in New York at the moment and will spend a few days in Montreal. The last time I was really nervous, was when I opened in West End in the musical ‘Sunset Boulevard’, I had stage fright.

A little bit of nervousness is good, I find that it turns into energy, which in turn enhances my performance.

What is the secret to longevity?

I am just lucky, and I love what I do. Singing is a great Joy that I do not class as work. Actually performing is great I am totally energised singing on stage with an audience.

What do you insist on at each Hotel?

Oh, I am not sure…..probably that I must be provided with a steam Iron and an Ironing board at all Hotels. This is even in my contract. I find ironing therapeutic, and it helps to ease the nervousness of going on stage. Besides I would far rather that I burnt a hole in my clothes than someone else.

Do you have a special message to the people of the Fraser Coast?

I am very excited about being back in Australia and on the Fraser Coast. It is always a thrill. I hope that the audience like my music and what I do. It will be offered with love and much Joy.

Karise Eden is excited to return to the stage