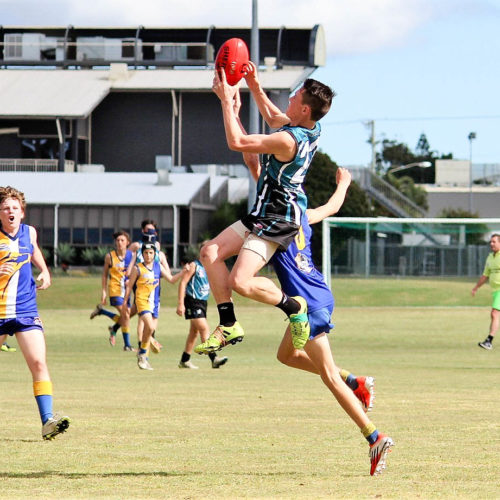 Australian Rules Football is alive and well on the Fraser Coast, with two clubs in Hervey Bay and one club in Maryborough. Traditional powerhouse club Hervey Bay Bombers, relative newcomers Bay Power and a resurgent Maryborough Bears make up the local contingent. In an expanded competition in 2017, these three Fraser Coast clubs line up against two Bundaberg clubs and the inclusion this year of Sunshine Coast clubs Pomona, Gympie and Maroochydore.

Every age group is catered for from six-year-old Auskick kids, Under 8’s up to Under 16’s, then a Senior and Reserves open age competition. Under 8’s and under 10’s play on a Friday night under lights and all the other age groups play on Saturday. AFL Queensland work hard to promote the sport in schools, regularly holding clinics across the region. This has flowed on to a growth in junior participation at club level. The continued growth in juniors will ensure the ongoing sustainability of AFL in the Fraser Coast region.

Girls footy has taken off too. Girls can play junior football with the boys up until Under 14’s. Then, following on from the success of the AFL women’s league, both Bay Power and the Hervey Bay Bombers are fielding a senior women’s team in 2017, and look set to play under lights each time the two senior men’s teams meet. This renewed interest follows a layoff for a couple of years when prior to that both these two teams has a couple of hard fought out women’s games with the honours shared. It is going to be interesting to see who can get the best team on the track, with both clubs wanting to have the bragging rights.

And you think you are too old to play Australian Rules Football? Well we even have a Masters team, the Hervey Bay ‘Fruitbats’ who play against like-minded veterans from the Sunshine Coast to Brisbane. We have players that range from 35 years to well into their mid 60’s. The Fruitbats play in the over 45’s age group competition, so if you are over 35 and keen for a kick and a social get together come down to training each Monday night at the Bombers ground on Raward Road, Hervey Bay. Training continues twelve months of the year, rain, hail or shine, and club members proudly brag that a training session has taken place every Monday for more than ten tears, including a couple of Christmas Days.

This year, competition in the senior grades is going to be fierce. Bay Power are looking for the club’s first Premiership after going down to Bundaberg’s ‘ Across the Waves’ in last year’s Grand Final. Power Coach Michael Gay has recruited well, with new captain Josh Wheeler moving into town from Newcastle, gun midfielder Michael Walsh recruited from Shepperton and several of the Power’s local juniors stepping up and adjusting to the pressure of senior football. Hervey Bay Bombers will still be smarting over the loss in the ANZAC Day blockbuster to Bay Power, and Bomber’s captain Lochie Woodhams will have his boys regrouped and ready to redeem themselves. In the Reserves grade, the Maryborough Bears look like the team to beat, posting some impressive wins in the early part of the season , and will be hoping to go all the way.

So if you find yourself looking for something to do on a Saturday afternoon, head down to one of the local AFL grounds and enjoy the atmosphere of the game. Food and drinks are available from the canteen and the bar will serve drinks once the senior grades commence. For details on the seasons draw and the location of the grounds search the AFL Wide Bay or Individual club websites. – Story by Michael Sunderland