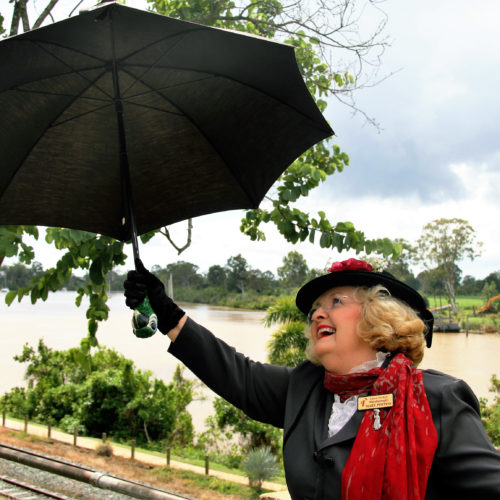 Mary Poppins is a series of eight children’s books that were written by the Author P.L.Travers. For those who have never read them or seen the movie, the books are centred on an English Nanny named Mary Poppins who gets blown in to the Banks establishment and becomes Nanny to the children of the household.

P.L.Travers was born on August 9, 1899 in Maryborough, to parents Margaret Agnes Goff, and Travers Robert Goff. At birth P.L.Travers name was Helen Lyndon Goff, in the 1920’s she changed her name to Pamela Lyndon Travers which also became her stage-name. Pamela was well known as a writer, actress and a Journalist. She died in April, 1996 in London.

With the Mary Poppins festival coming up I thought that it was only fitting that I met our very own Maryborough Mary Poppins, Carmel Murdoch, who arrives to our interview in full costume bursting with energy, and with a twinkle in her eye, complete with her Gladstone bag, hat and umbrella.

We start off with a photo shoot in Queens Park, overlooking the Mary River. This is delightfully interrupted by a group of English Tourists who are all wanting to meet Mary Poppins. Without missing a beat Carmel welcomes them all and launches into the history of Mary Poppins to the absolute delight of the tourists. This was then in turn followed by the posing for photos that for these travellers I am sure will be talked about for years to come.

The year was 1999 when it was discovered by the Maryborough and District Family History Society that the Author, P.L.Travers was born in the building down on the corner of Richmond and Kent St. Upon this discovery it was decided that a Mary Morning tea at the Markets would be held, this was one of many. So that was where it all began, with a cup of tea at the markets. Carmel said, “ By the time 2005 came and we became a city there were so many people that used to come to Mary Poppins Market Day that we could no longer parade down the street as it was shuffle only, then the planning started to make it into a festival here in the Park in 2007.”

Carmel was contacted by the President of the Proud Mary’s, Ann Miller who said that the Courier Mail were coming up to do a story on Mary Poppins, Carmel thought that was wonderful and asked Ann who was going to be Mary Poppins only to be told that she was. So there it began. Carmel said, “ So I had a white boater hat, we had to be very careful of copy write laws so I couldn’t wear a replica of her costume. Instead I wore a black jacket and a navy skirt, white gloves and instead of having a carpet bag I had a gladstone bag, I borrowed my mother in laws brooch and my father in laws black umbrella and I went to work, and I have been Mary Poppins ever since.”

Carmel eventually had her costume handmade. In those days nannies used to wear black, but Carmel did not want to wear black, and couldn’t go red like Mary Poppins in the movie, so went charcoal grey instead.

Carmel has been Tourism Ambassador at the Fraser Coast Regional Council since 1998 as Mary Heritage, her period costume is based on the 1850’s. The character Mary Heritage in fact evolved in 1987, with her first showing at World Expo 88. Carmel is the 5th Mary Heritage.

Other Characters Carmel takes on are ‘Mary Christmas’, and ‘Mary Rivers’. Carmel also became the ‘Mary Widow’ in 2004 and conducted Ghost Tours for eleven and a half years. These tours are now only run for large groups with a minimum of 46 people and bookings are essential. Carmel’s latest character is ‘Steam Punk Mary’ who is a storyteller on the Maryborough Story Trail.

As we walk past the Mary Poppins Statue Carmel reveals, “ When I see that she is a bit dirty I give her a spruce up with warm soapy water and I use boot polish and a brush to make her shiny and sparkling again.” Just before our interview ends, with that twinkle in her eye, Mary Poppins breaks into song, and sings, ‘A Spoonful Of Sugar’ in a soft, sweet, melodic voice and I can’t help but to feel some of that fabled Mary Poppins magic embrace me. – Story by Kim Parnell

For more information on the Mary Poppins Festival go to: https://www.marypoppinsfestival.com.au/