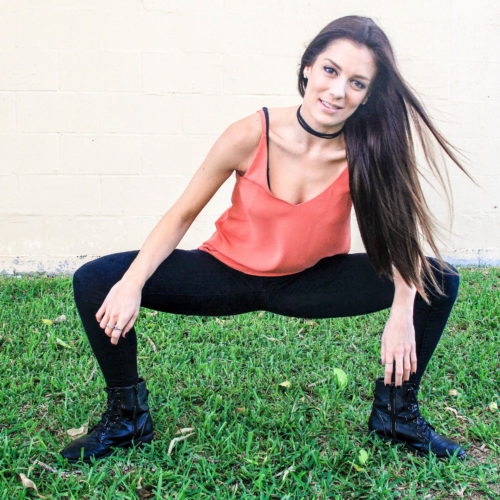 I sat down with the beautiful, vibrant and energetic Katie Struick a few weeks ago. Katie is 29 and is an Actor, Singer, Model, Dancer, and Dance Teacher who just so happened to be born in Maryborough. Katie started dancing at the age of three and attended the Jaye Smith Academy of Theatrical Dance. Growing up on the Fraser Coast she remembers being busy all the time. Katie said, “I was really lucky as my parents gave me lots of opportunities so when I was little I also went to swimming training, played tennis, the violin, and I also sang.”Katie then attended Pialba State School as her mum taught there, now over 30 years later she still works there. As a senior Katie then went to Fraser Coast Anglican College.

Leaving Hervey Bay at the age of fifteen for a few months, after being accepted into the Queensland Dance School of Excellence which is a high school program based in Brisbane. Katie describes this time period as being, “Pretty intense. It was hard for my parents but they knew that I wanted to do it and they only accepted fifteen people every year. So it was kinda a big deal.” while Katie loved it she really wanted to focus on her studies as well as they weren’t high on the agenda at the school, so she moved back to finish high school.

While always a lover of dance Katie did not decide to dance professionally until the age of about sixteen or seventeen because she wanted to finish school and go to Uni, it did not take her long to realise that she could always go to uni, whereas as Katie said, “ you can’t dance forever, you need to do it whilst you can and while your body allows you to.” Her parents embraced the idea of their daughter pursuing a dancing career as Katie was always academically inclined.

During her earlier career, Katie was a dance entertainer on Carnival Cruise Lines from 2009 to 2012. Her first contract was when she was nineteen, most of her contracts were eight months long. During those years a total of five contracts were completed. Katie said. “It was great, you got paid to travel and do what you love to do, and you meet really wonderful people.”

A lot of her contracts were places in the western and eastern Caribbean like Mexico, the Cayman Islands, and Jamaica. On another contract, the home port was New York so she went to Canada and Nova Scotia as well which Katie describes as being, “ Absolutely amazing.”

Having had her fair share of injuries over the years from dancing. Katie tore her calf muscle when she was twelve, which she says for a twelve-year-old was pretty bad. On another occasion, she pulled all the ligaments in her ankle which stopped her from dancing for a few months. Then Katie dislocated her shoulder when she was in the middle of a show on a cruise ship, this injury still gives her grief at times, the injury was nearly five years ago now. Katie works really hard on maintaining her strength and to avoid surgery.

When asked what Katie would like to achieve career wise she responded with, “If I could do anything career wise I would be a back up dancer for Justin Timberlake.” Katie thinks that would be the ultimate dream for sure as he is so talented. If she has the chance Katie would also love to be in a musical and auditions for these when she gets the chance.

As an Actor Katie thinks it would be pretty cool to be cast in Australian soapie, Home and Away. Or the Bold and the Beautiful, (we took this moment to practise the look. That long sultry, intense gaze into the camera, then break of into peals of laughter), Katie admits to not watching many soapies due to her busy schedule.

Recently Katie was back on the Fraser Coast to dance in the show, ‘Untapped’ at the Brolga Theatre. Katie said, “This was amazing as I used to perform at the Brolga. That’s where my end of year dance concerts were, so walking back in after twelve years was so weird and awesome.” This show was by the RAW Company, with Director, Andrew Fee and Co-Director and Choreographer, Jack Chambers. The group toured around Queensland. They drove from Brisbane all the way up to Cairns stopping along the way then drove all the way back down. During this time they got stuck with Cyclone Debbie and two shows had to be cancelled due to the Cyclone damage in Proserpine. The tour finished with nearly two weeks at the QPAC in Brisbane.

Currently Katie lives in Sydney and teaches at 2Step Dance Studio and Capital Performing Studios. During the day she is at Uni studying a Bachelor of secondary education with a major in maths.

Katie’s advice to those interested in the arts is that you would have to really want it. There are some days where you get knocked down. During the audition process you may not have the right look or you are the wrong height or your hair could be the wrong colour. Etc. You have to have thick skin. You also need to get to as many classes as you possibly can because then you are a face, people know who you are, your not just another dancer. Just get out there and be social, be kind, and never burn your bridges. – Story and photos by Kim Parnell