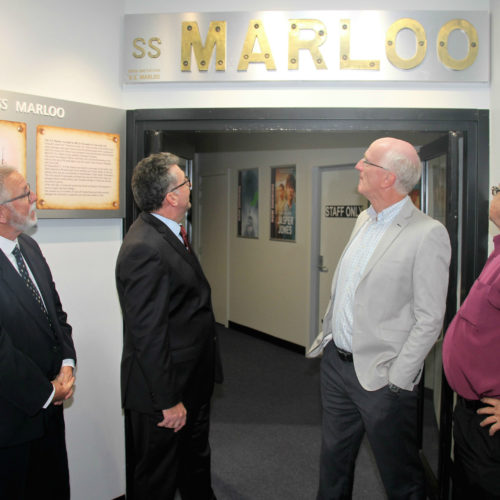 I walk into the newest addition to the Hervey Bay Boatclub, the Marloo Twin Cinema to take a sneak peak. Of course my first stop is the canteen where I eagerly purchase some popcorn and a cold drink from the smiling attendant. The Cinema is fully licensed, but I restrain myself and settle for a juice instead.

There are two cinemas, one that holds 50 seats, then another slightly bigger that holds 60 seats. As I walk into the theatre they are the first thing that grab my attention as they are deep and plush. I gratefully sink into one as the movie begins. I allow myself one piece of popcorn because I know how annoying it is to finish all of your popcorn before the movie has finished, (there is nothing worse).

Gritty Australian drama ‘Jasper Jones’ is showing and I get swept away with the characters. All to soon the lights come on and the movie is over. But all is good as I know that next time I will be back with the entire family.

Recently I caught up with CEO Ed Gibson to chat about the cinemas. Ed tells me that the room was built between 1999 and 2000, and was used for everything from bands to events to functions to indoor bowls, darts, snooker tournaments and conventions. But that It had never really yielded a return on investment for the members. About two years ago during a strategic planning meeting, it was decided that the Boat Club needed to keep on diversifying, so the idea was born to build a cinema. It took a year of planning, and then took about four to six months to build, The build cost just over $200.000, with quite a bit of the work being carried out by experienced staff and local businesses.

In 2002 one of the members obtained the actual name badge from the ship the SS Marloo. He kindly donated it to the club, later on this was then mounted above the doors thus the Cinema became the Marloo Twin Cinemas.

Ed said, “What’s exciting is that we can utilise the facility for events other than movies; our first function will be the upcoming State of Origin games. We also hope to show events such as Bathurst, AFL, and NRL Grand Finals on the big screens, we are very excited.” – Story and Photos by Kim Parnell

To see what is on at the movies go to: http://boatclubcinema.com.au/