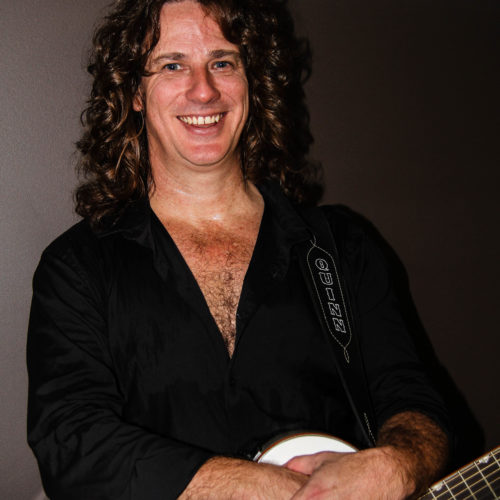 If you haven’t seen ‘The Radiostar’ live you honestly don’t know what you are missing, with his curly mop of hair, huge smile and engaging eyes, he oozes pure charm. From the moment he begins to play right through until the last note his energy and passion is on display for all to see. In fact it is extremely hard not to break into song while at the same time noticing your body start to involuntarily move to the beat.

The Radiostar’s music nostalgically takes me back to my youth. To me it was all about, drum machines, big hair, boom boxes, tapes, chewing gum, leg warmers and tight jeans buckled to the waist. I was young, free and dreaming about the future.

‘The Radiostar’ is Quinn Hendry’s stage name and one he has used well over the years. The name came from the 1979 hit ‘Video killed the Radio Star’, and I swear that I will now be singing that song in my head for the rest of the day. Starting out, his repertoire was  pretty much 70’s and 80’s music. But as the years have gone by Quinn’s song list has grown to include the big hits that we know and love right through to the modern tunes, In fact Quinn is constantly learning songs as they are requested, and said, “ I like to think that I’m covering the feel good songs that we’ve all grown up listening to.”

While singing and dancing from the age of eight it wasn’t until Quinn was sixteen that his dad bought him his first bass guitar and he started his own band, that is when Quinn knew that this was something that he really wanted to pursue. Growing up and listening to records and tapes of The Who, The Kinks, The Beach Boys and Leif Garrett was a definite influence in his life.

Like most kids the first ever instrument to land in his hands was the humble recorder, on the school list of many Aussie kids still to this day, much to the annoyance of their parents and neighbours.

At just fourteen years of age Quinn wrote his very first song and has even recorded some. Quinn also wrote the current jingle for the Maryborough Sports Club. This has been playing on the radio for the past few years.

When asked ‘which famous musician he admired’, Quinn responded “ Prince. I saw him in concert four times and his showmanship was pure genius. He embodied what was great about James Brown, Little Richard, Jimmy Hendrix and Sammy Davis Junior all at once. In my opinion, he is the greatest musician popular music has ever known.”

Quinn has also been a Roadie for both Jenny Morris and Wendy Matthews to name a few before he joined a show band in the 90’s called, ‘Countdown’. After taking a seven-year hiatus from music after moving to Hervey Bay he decided to go Solo as ‘The Radiostar’ which he has been doing now for about nine years.

Quinn has now been living in Hervey Bay for over 18 years. When he is not belting out tunes at various pubs and clubs throughout the Fraser Coast Quinn enjoys nothing more than hanging out at home and listening to music.

To find out where he is playing find him on Facebook under Radiostar Quinn, or have a look at our Gig Guide in this edition.