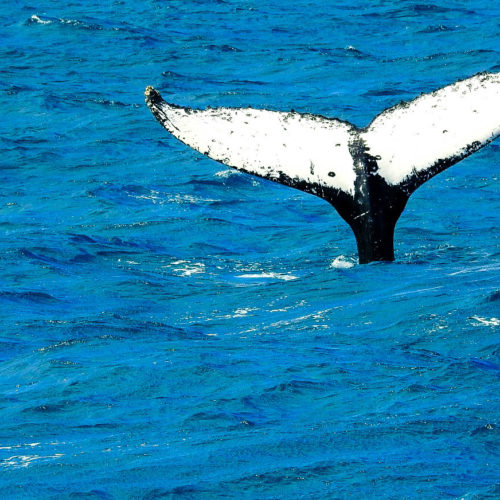 Each year the Humpback Whales use our calm, warm, sheltered waters of Hervey Bay to play, stay and interact with us and each other. The Whale watching season runs from mid July to mid November, the mothers show off their newborn calves during the months of September to October. This period is full of fun as we see all their moves from pectoral slaps,  breaching, tail slaps and tummy flashes.

This is a great time to gather your family and friends and get out on the water to see these gentle giants of the sea up close and personal. This will be a memory that will stay with you for a lifetime.

The Story of Nala with Jill Perry

Nala is the patron whale of Hervey Bay. The Hervey Bay community adopted Nala in 2005 as part of the Humpback Icon Project, which celebrates the annual migration and campaigns against whaling.

By 2010 they had run out of movie names so it was put to the public to name Nala’s new calf. Mirrhi, an Aboriginal name meaning ‘little girl, was chosen.

It is not the first time an Aboriginal word has been used to name a humpback whale. Migaloo, who is as a “hypo-pigmented” humpback or albino whale, is another famous whale seen on the east coast of Australia. Migaloo is the name Aboriginals use to describe a White Fella.

Humpback whale watching has been operating in Hervey Bay for 30 years after Brian & Jill Perry discovered whales in the bay in August 1987 & started Whale Watch cruises on their fishing vessel. Hervey Bay is known as the Whale Watch Capital as whales stay & play in the calm waters inside of Fraser Island for 4 months each year from July till October. Up to 30,000 humpbacks are expected to migrate along the coast this year with around one third entering the bay to rest & play in our pristine waters.