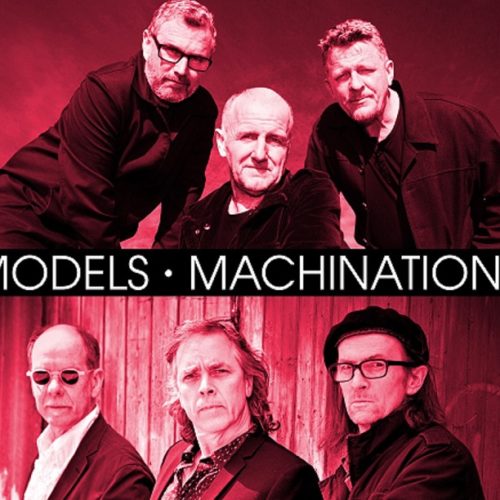 I thoroughly enjoyed chatting to Models band member Andrew Duffield, along with Machinations band member Nick Swan earlier this week. Both are original members of their respective bands, and have toured both separately and occasionally together since the eighties. These two iconic bands continue to thrill and excite the crowds with their music, and have joined forces once again with their current tour, ‘Models and Machinations’ about to hit the Beach House Hotel, Hervey Bay.

Models: Formed in Melbourne in 1978, in 1985 the Models had a number 1 hit with the single, ‘Out of Mind out of Sight’, the album with the same name peaked at number three on the Australian Albums Charts. The band have since created many albums and songs. Even though they have broken up and reunited several times their music that we all know and love has kept playing throughout the years.

How do you feel about the Internet in the music business?

I think the Internet and Social Media are a double edged sword. We rely on royalties and album sales. But now people just click on and listen to anything they like, it is right there at your fingertips.

Who did you grow up listening to?

Well I was born in 1958 and my sisters were really into the Beatles. All we had back then was AM radio. I listened to The Doors, Creedence, T. Rex, David Bowie and Roxie Music.

A song that inspired me at the time was ‘Kraftwork’, by a german band called ‘ Autobahn’. This was the first song that I heard the Synthesiser play in. The Synthesiser was huge in the 70’s.

When you are not doing the music thing, what do you like to do that may help with your creativity?

I am not sure about helping with my creativity, but right now I am focused on my twelve and a half year old dog named Wilson he is a Schnoodle. I had never had a dog until I was in my thirties. I love to take him for walks as right now I am in a cold recording studio with no windows in South Melbourne, (most recording studios have no windows). So often I just have to get out, breath in the fresh air and take Wilson for a walk.

Do you have a favourite, ‘Models’ song?

For me ‘I Hear Motion’ would have to be my favourite. I wrote the music almost by accident as I was just sitting there trying to work out a rift of Stevie Wonder’s, and came up with our next song instead. ‘I Hear Motion’ came out in 1983. We were supporting David Bowie around Australia and New Zealand, It truly was the best time.

What can you tell me about your instruments, do you have a particular brand you always use, or will you use anything?

I like playing with my own instruments, so I will definitely be bringing them on the plane. I will be bringing two with me that reach the weight limits allowed on the planes. Musicians do get looked after with weight restrictions which is a good thing as we have so much equipment.

My preferred choice of Keyboards are Kurzweil and Prophet 12. These are the brands that I play and am used to.

Could you briefly describe the music making process, what comes first, Lyrics or Music?

With the 1983 song ‘ I hear Motion’ the music came first. Back then I remember that we used to use the ‘ cut and paste’ technique. We would all write lyrics on pieces of paper, cut them up into individual words and move them around until we came up with something we liked. David Bowie liked this technique.

The advertising world is very different. Sometimes it is the words first as you will be advertising a particular brand, so you have to make the music around the words. Writing for advertising is great fun as it is fast whereas the process of making records takes a long time.

If you could send a message to the people of the Fraser Coast about your upcoming show what would it be, and have you ever been here before?

Would you believe that we have never performed on the Fraser Coast. I last came to Hervey Bay about twenty years ago to visit a musician friend who lived here, it was great fun.

“Come along, we play music from 1978 through to the late 80’s. So get your dancing shoes on. We are very excited to be coming to Hervey Bay. See you there.”

Machinations: Formed in 1980 in Sydney, their second album, ‘ Big Music’ contained three singles. One of those singles, ‘No Say In It’ was released in 1984 and is the bands highest charting single with it peaking at number fourteen. The band has released four albums to date. Machinations is also made up of three out of four of their original members.

So how did the tour with Model come about?

We got together again at a Vivid Concert in Sydney in 2016 that both bands were performing in. We used to tour together at times in the 80’s during that period we even had our own singlets made emblazoned with the words Models and Machinations. I still have one of those singlets somewhere.

We realised in the eighties that even though our music is quite different our audiences are the same.

We have been very lucky as we still have three out of four of our original band members still touring with us.

What are your feelings about the use of the Internet in the music business?

I use social media itself as more of just a shop front than anything. I am not interested and indeed block people who insist on showing me pictures of every meal they eat, the clothes they wear etc.

I feel the the Internet and social media have fragmented the music industry. Anyone can sit in their bedrooms now with an I phone and apply special effects and make it look great. Whereas the same process used to take time and cost millions back in our day.

When we started there was a process, firstly you had to be be good enough to get the gigs. Then you hoped that the record companies noticed you, if you were one of the lucky ones you may then have been invited to make a single, if the single was a hit or did well you may then have been offered a record deal. When we started back in the day no one played covers, it was important for bands to have there own unique sound especially if you wanted to be noticed, that was just the way it was.

There is good music out there but you just have to find it. I found a great English band called, ‘ Elbow’ a while ago, they have a fantastic sound.

What do you like to do outside music that helps with your creativity?

I actually write band reviews that are picked up by band magazines from time to time. I also enjoy fishing and pursue this when I can. My beautiful daughter who is five keeps me on my toes as well. I became a dad at fifty two and am loving it. Better late than never, I absolutely dote on her.

Being a Bass Guitarist are you loyal to a particular brand or do you play anything?

I will play anything, but at the moment I am playing a one from Music Man Guitars.

Who did you grow up listening to?

It was actually the Beatles that made me fall in love with music. Then as kids we go through our fazes. In the 70’s it was Led Zeppelin, Black Sabbath, Deep Purple. The 80’s was bands like Santana, Gentle Giant etc.

Which song from Machinations would you say was your favourite, or that gets requested the most?

It would have to be, ‘ Average Inadequacy’, from our very first full length album called Esteem. It is precious, the first of anything is always the most special.

‘ My Hearts on Fire’ is one of my favourites as well. I love the melodies and the eastern scale, its funky and is off our second album ‘Big Music’. My Hearts on Fire was actually written over a weekend. I find that you always come up with the best songs when you are under pressure.

Do you have a special message to the people of the Fraser Coast regarding your upcoming tour?

“A lot of our songs have been revamped, and we will be singing at least one new song. All of the original members are together bar one. So come down and enjoy the night.”