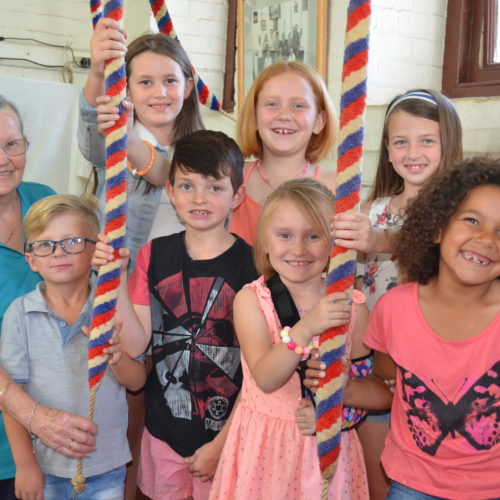 A chance to pull the ropes to ring the rare bells of St Paul’s Anglican Church Bell Tower is up for grabs during Maryborough Open House and Garden weekend in late September.

The door to the impressive 25m bell tower will be thrown open for visitors from 9am on September 23 when tower captain Ruth Andersen will give groups of four to eight a crash course in bell ringing and playing a tune.

“It’s very simple, it’s very easy, in five minutes I’ll show you and then off we go and we play a song,” she said.

Ms Andersen explained that ropes tied to the clappers inside the bells were fed into a pulley on the side of the framework then dropped down two floors below where the bell ringers stood.

She said everyone was assigned a bell number and followed the numbers on a sheet to play songs.

“I usually call the number out,” Ms Andersen said.

“The songs that I choose usually have every one of those bells being used as often as possible so that everybody gets a fair run of being able to pull a rope.

She said as long as people were able to climb the stairs, they could have a go at ringing the bells.

The eight musical bells with a ninth half tone bell were cast in London in 1887 and are believed to be among just five sets in the world.

Maryborough pioneer Edgar Aldridge donated the tower and its peal of nine bells to the city in memory of his wife Maria who died on March 17, 1886 after living almost 37 years in Wide Bay Village, which was later renamed Maryborough.

Maria, an ex-convict transported to Tasmania for stealing two tubs of wood was one of the first white women in the town and according to the plaque on the bell tower, she was “a conscientious Christian woman who through life was a peacemaker, ever forgiving, doing good and helping all who were in trouble, distress or affliction”.

Tragically, the sailing ship which brought the bells to Maryborough was on its return journey when it was believed to have been caught in a cyclone off the Capricorn Coast and was lost with its 21 crew.

Then, in another sad postscript, six weeks after the bell tower was dedicated in April 1888, Edgar died in his sleep at Baddow House.

Maryborough Open House and Garden chairperson and councillor George Seymour said ringing the bells was one of the most popular listings on the event schedule.

He said children and adults alike were welcome and no bookings were needed.

“It’s a fun way to connect with the history of Maryborough and the church,” Cr Seymour said.

The doors to the bell tower will close to Open House visitors at 4pm on September 23 but Ms Andersen said anyone wanting a return visit could make a booking on the day and pay $5 per person for a more extensive tour of the tower and time to ring the bells to their heart’s content.