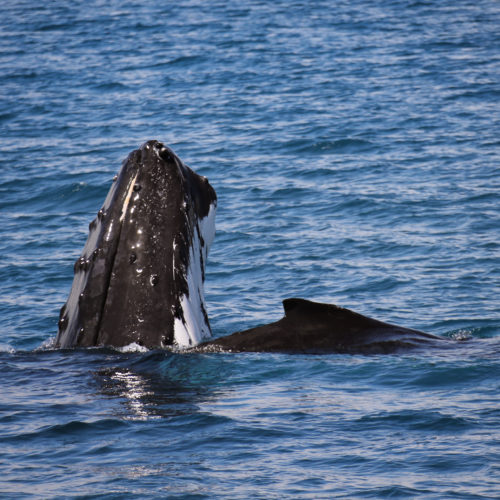 Nala’s newest bub has been named and the winner is…

Hervey Bay whale watching industry pioneer Jill Perry selected the name to stick with the Lion King theme which has seen many of Nala’s calves named after characters from the animated Disney movies including Simba, Pumba, Rafiki, Mufasa and Zazu.

More than 20 names were suggested after radio station Hit101.9 Fraser Coast ran a competition, in conjunction with Fraser Coast Tourism and Events, for people to submit their ideas.

“Some fantastic names were put forward and it is very hard to choose the right name for a baby, especially when the gender is not yet known,” Mrs Perry said.

One entrant suggested Whale McWhaleface, in the tradition of Boaty McBoatface being suggested as a name for UK polar research vessel and a new train in Sweden being named Trainy McTrainface.

Other ideas included Nala backwards – Alan for a boy Alana for a girl – and words taken from different languages such as the Hawaiian girls’ name Pomaikai.

The competition winner, Ashy Nielsen, who suggested the name Kovu, will receive a half-day whale watching trip for a family of two adults and two children aboard the Tasman Venture, including a morning or afternoon tea platter, valued at $310.

The name will be catalogued by Trish and Wally Franklin, founders of non-profit research and information organisation The Oceania Project.

Tasman Venture tour guide Vicki Neville explained that Nala was first seen in the region 25 years ago and was spotted off Fraser Island again on August 30 with her 13th recorded calf.

She said the reason Nala was so special was that she had been such a regular visitor to the area and because she had given birth to so many calves.

Nala has been immortalised in a massive sculpture on the corner of Main St and Old Maryborough Rd in Pialba.