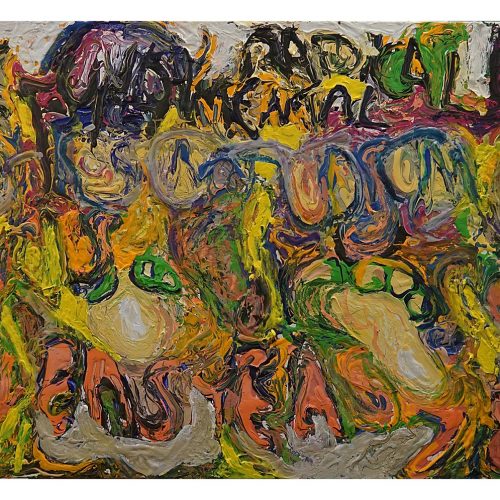 Wilhelmus Breikers was born in Holland, and emigrated to Australia, where he studied at the College of Art. He was a finalist in the 2015 Gallipoli Art Prize, and also a finalist in the 2017 Brisbane Art Prize and has exhibited extensively in both solo and group shows. This new show, called “The world is a better place”, is the next exhibition to open at Gatakers Artspace, Maryborough, on February 2.

“My father was a painter” Wilhelmus Breikers said, “so I picked up on that when I was young. He sparked my interest in visual arts. Since coming to Hervey Bay I have continued that and work in both two-dimensional and three-dimensional artforms.

Wilhelmus explained his method: “When working I generally start with straightforward fairly representational-type studies that respond to the subject’s shapes, forms and colours and then often retain some of that while developing arrangements that contain their own inner logic. Basically I make work from subjects that interest me, trying to make something that also interests me.”

In this exhibition Wilhelmus Breikers presents a collection of framed drawings, paintings and photographic works that, he says, questions the life of images.

The exhibition title,“The world is a better place.”, is declarative” he said, adding “but it begs the question. It also marks out the space in which political, environmental and social concerns search for common ground with concerns related to visual form. That narrative is a jumping off point for thinking about art for its own sake and art for the sake of something else.”

Asked what he thinks is the role of art he answered: “I am to be persuaded that Art effects social, political, moral and any other kind of change in the world, but that does not mean that I do not make work that references, and reflects upon, issues and situations in the world around me. To make or do anything questions the value of that very same making or doing, and art is no different. And whatever the subject or form of the artwork, the question of the worth of it, and of the worth of the doer or maker, is unavoidable and intrinsic.”

“The world is a better place” consists of 20 recent pieces that include small-scale paintings and drawings of familiar Fraser Coast landscapes – such as the one titled “Dundathu”; large paintings including the 1.5 x 1.2 m “Prophet and Profiteers” – a reflection on greed and corruption; the photographic work “Be careful, the steps are wet” – an exhortation of sorts; and the work “Shoot the canon.” from which the exhibition takes its title. “You’ll find the exhibition title in the text incorporated in the artwork” Wilhelmus revealed.

And that the artist is grounded in an appreciation of the world around him is no better demonstrated than by the work titled “There is a boat that waits / to take you across / the other side / to life.” Of this painting Wilhelmus explained: “The painting has its origins in a series of studies of the valley view that greets me every time I drive to Brisbane and cross the Gunalda Range. In one of these I saw the possibility for this work: In it the landscape is a metaphor for life, the shed becomes a cave or shelter that offers refuge and is a departure point, and the pale-coloured boat is waiting to take you across to the other side”.

The exhibition runs from February 2 to February 25 at Gallery 4, Gatakers Artspace, Maryborough and will certainly mark the start of the new year in dramatic fashion. David Lewis – Councillor (Environment, Community and the Arts – Fraser Coast Regional Council) will deliver the opening address at 6.30pm Friday February 2. There is no admission charge and light refreshments will be available.