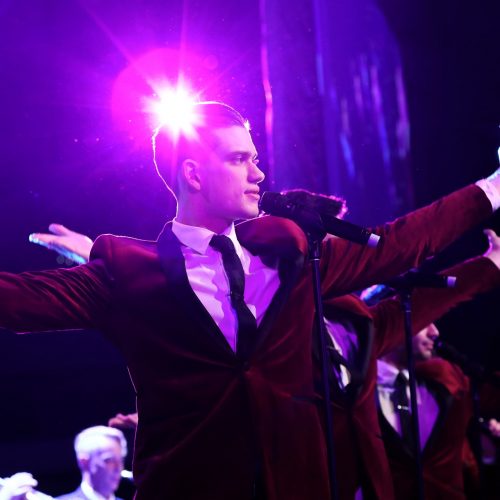 Come on, who doesn’t like a boy band. With those great harmonies, coordinated dance moves and looks to melt the heart. Well let me tell you that Boys in the Band will not disappoint in all categories. Singing hits from all of our favourite boy bands, from the Jackson 5 to Simon & Garfunkel they have it all covered. So get your mojo on with the Boys in the Band coming to Maryborough this month.

I caught up with one of the boys, Tom Struik a few weeks ago to chat about the show. This will be his third tour with the boys.

Oh, and if the surname sounds familiar that is because I interviewed his equally talented sister Katie for the magazine in June of last year. – Kim – Editor

What a talented family you have, I did an interview with your sister Katie last year, how is she, do you get to catch up and come home very often?

My Girlfriend and I come to Hervey Bay a bit, mostly at Christmas time. I catch up with Katie a fair amount as I visit her in Sydney, she looks after me really well, I am her baby brother, even though I am twenty five I will always be her baby brother.

So what is the story behind Boys in the Band?

Boys in the Band is a group of four boys singing, with a live band behind us. We sing everything from Jersey Boys to Jackson 5 and everything in between. We celebrate every genre that we can, and attract every audience right through to Grandma and Granddad.

I read that the band have performed alongside some pretty amazing artists & Bands, in various locations name your most memorable?

My two favourites would have to be performing in the Twilight Series at both the Sydney and the Melbourne Zoo. They set up a huge Amphitheatre outside and the audience was massive. So we were performing on stage with the sound of Elephants trumpeting in the background, it really was an amazing experience.

We also recently did the Toowoomba Flower Festival and Daryl Braithwaite was in the line-up. Another year there was Taxiride. The flower festival was a big set-up with a massive stage.

What do you love most about Hervey Bay, what are some of your best memories?

My dad owns the local Cinema. I always used to hang out there. I would also go to the beach, the Esplanade is definitely the best place to grow up.

What do you think that it is that people love the most about boy bands?

Boy bands are so personal, and lets face it we are handsome young dudes, ha,ha. We find that people want to be like us, honestly what is there not to like. Plus we also have some great dance moves.

How often do all of you practise?

With our Corporate Gigs we do them so often that we don’t really need to rehearse, we know this show back to front as we have been performing for a long time.

Having said that though we have just finished a ten day gruelling rehearsal in Sydney practising some new material, One of those being an Aussie Rock Medley.

What can people expect if they come to see your show?

People can expect a great night out, lots of music and some fantastic dance moves. There will be lots of sing a longs as well. If you have seen our show before you will get to see us performing some new stuff too.

Make sure that you get to the Brolga and watch our show. You will not be disappointed, we look forward to entertaining you. See you there!.

Boys in the Band