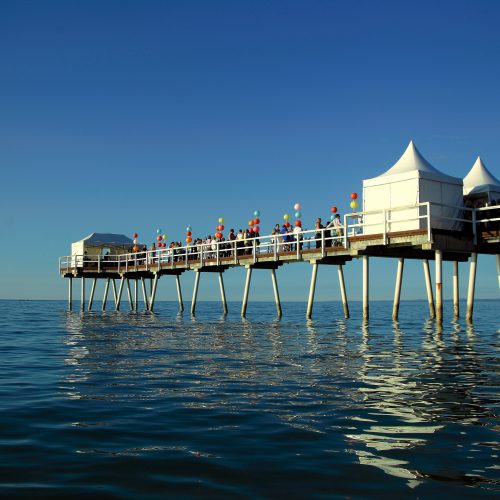 One of the Fraser Coast’s most stylish events returns to the Hervey Bay Ocean Festival this year.

Wine and food lovers are expected to relish the opportunity to once again attend the Coast Pop Up Sunset Pier Party on the Scarness Jetty from 2pm to 5pm on Saturday, August 11 after a two-year hiatus.

Coast Restaurant & Bar owner Julia Paussa described the chic event as a big cocktail party on the pier with food tents serving canapes and representatives of beer, wine and spirit sellers talking to the guests about their products.

“We’re really excited to make it the best one we’ve done,” she said.

“We’re working on a menu that reflects our local produce.”

ery in Maleny, spirit and liqueur maker Kalki Moon Distilling and Brewing Company in Bundaberg and wine maker Raidis Estate, Coonawarra would add an entertaining, educational element to the afternoon.

Pricing is yet to be finalised but tickets will go on sale from July 10 at coastherveybay.com.au.

Brendan Bowers, the event coordinator for Fraser Coast Tourism & Events, said a new addition to this year’s Ocean Festival, presented by USC, would be the Fraser Coast Kite Karnival on Saturday, August 11.

He said people could bring their own kites or pay $5 for a paper kite to colour-in and fly on the beach near Urangan Pier from noon till 4pm.

“We’ll have some competitions and prizes for the best coloured-in kites on the day,” Mr Bowers said.

He said the crowd-pleasing-favorite Ocean Festival events would be back this year with the Hervey Bay Seafood Festival taking place in Urangan on Sunday, August 12; the Whale

Parade and Concert in Scarness and Pialba on Saturday, August 18 and the Paddle Out for Whales in Torquay on Sunday, August 19.

“Each year the Seafood Festival draws bigger and bigger crowds with people converging on Fishermen’s Park to fill their bellies with fresh, local seafood; listen to great live entertainment; watch cooking demonstrations and enjoy all of the other activities on offer,” Mr Bowers said.

“The whale parade, held the following weekend, is a fun community event with floats lighting up the Esplanade from Scarness to Pialba.

“A concert on the Seafront Oval and sideshow alley entertains festival goers before and after the street procession.

“Fans of the party, dance and rock music will be in their element this year with Central Queensland band Phineas Q booked as the concert’s headline act supported by Hervey Bay’s Leonie Kingdom who recently topped Triple J’s Unearthed chart.

“A great fireworks display will top off a terrific evening.”

He said the following day, the sentimental favourite Paddle Out for Whales would take place in a new location, having moved from Scarness to Torquay.

“We made the decision to move the event to Torquay because the foreshore is more easily accessible for participants, spectators, and people with disabilities,” Mr Bowers said.

“It’s a great spectacle and the event has a lot of heart with people paddling out in kayaks, canoes, on paddleboards and all sorts of inflatable craft to form a circle to remember whales that have died during the year and support ongoing conservation efforts.”

Find out more at herveybayoceanfestival.com.au.