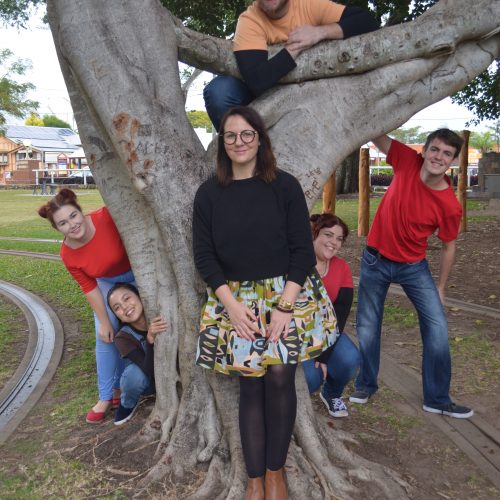 “The show was written especially for the festival and families should pack picnics and bring blankets or chairs to enjoy the live show under the banyan tree,” she said.

Writer and director Kristen Maloney said the story was about Michael and Jane, characters from the Mary Poppins books, who were refusing to go to bed until they heard a story.

“We have stories from the indigenous community, the Shang family who has Scottish and Chinese heritage, the local youth theatre group and, of course, a story about Mary Poppins,” she said.

“By hearing all these stories, Michael and Jane learn that time spent with your family, no matter how minor or ordinary, is always special.

Ms Maloney said animations were one of the show’s special elements and had been hand-drawn to look like a picture book.

She said the puppetry was also a lot of fun, turning everyday objects into fantastical creatures.

The banyan tree thought to have been planted as early as the 1870s and one of the largest in Australia, would “look truly magical on the night”, Ms. Maloney predicted.

The project, proudly funded by the Regional Arts Development Fund – a partnership between the Queensland Government and Fraser Coast Regional Council, involves about 16 performers from Maryborough and Hervey Bay.

Mrs. Peach said the show provided the perfect forerunner for Mary Poppins in the Park on Saturday, July 7, the festival’s major celebration.

The Queensland Government, via Tourism and Events Queensland, is proud to support the Mary Poppins Festival which features on the It’s Live! In Queensland events calendar. Your perfect next event is in Queensland where live events combine with the most incredible destinations, and life is beautiful one day, perfect the next.