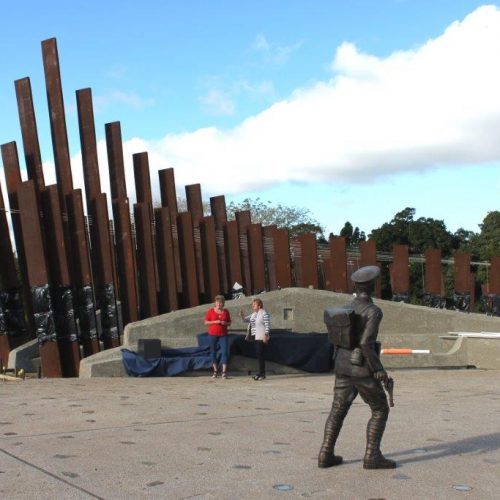 On July 21, the Walk with the Anzacs – Gallipoli to Armistice memorial will be unveiled in Maryborough, bringing to life for future generations the untold stories of World War I.

The regional city of Maryborough holds a significant place in military history as the birthplace of Duncan Chapman – the first Anzac to set foot on that fateful shore at Gallipoli.

Queensland Premier Annastacia Palaszczuk will be among the dignitaries at the historic opening along with representatives of the British, New Zealand, Belgian and Turkish governments, Australian War Museum director Brendan Nelson and senior military officers.

Surrounding a statue of Lieutenant Chapman, the emotive $5 million memorial incorporates other sculptural and audio elements. Whispered stories of soldiers, ironbark representations of three 9th Battalion boats that were the first to land at Anzac Cove and massive weathered steel columns soaring to 8m, representing the cliffs of Gallipoli, are part of the tribute.

The opening ceremony is a momentous milestone for the Queens Park Military Trail Project Committee, a community group that has built the memorial, operating under the umbrella of the Maryborough RSL Sub-branch.

A passion project for the committee, president Nancy Bates painstakingly pieced together the evidence that Lt Chapman was the first man ashore.

She said because WWI had been so bleak, it had been too painful for most people to examine too closely.

A century later people were asking questions but it was apparent many misunderstandings and misconceptions existed about why Australians were involved in the conflict.

“I think it’s only now, they’re starting to ask, ‘Well what did happen?’” Ms Bates said.

“We decided to try to answer some of the questions and personalise the journey with a collection of letters written home from Wide Bay men on the front line.”

She said some of the stories were confronting and controversial but the committee members wanted to ensure visitors would be engaged, informed, and affected by the memorial.

Ms Bates said the material and links would be expanded so people could visit multiple times and explore different stories and links.

The memorial is part of a wider military trail with points of interest dotted throughout the Fraser Coast region. The wreck of the former hospital ship Maheno and remnants of the Z Special Unit training camp on Fraser Island, a rare memorial bridge at Brooweena and a dramatic life-size statue of an Australian light horseman in Hervey Bay are among more than 20 stops.

The official opening of the memorial will begin at 2pm in Maryborough’s Queens Park.