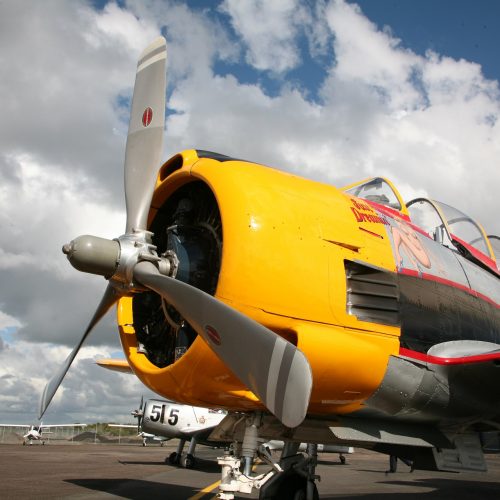 THERE is nothing more distinctive than the sound of a vintage warplane powered by a 1425hp radial engine at full song and that is the sound which will be echoing in the skies around the Fraser Coast this August when the Maryborough Aero Club (MAC) in combination with the Maryborough Ford Club hold the inaugural Fraser Coast Wings and Wheels on August 11.

The event, sponsored by Shannon’s Insurance, will give budding aviators, aviation enthusiasts and car buffs the chance to see multiple aircraft and many fine examples of our motoring history all in the one place – Maryborough Airport.

Maryborough has a long association with aviation dating back to the late ‘20s and reaching its peak during the Second World War when it became a base for the RAAFs No 3 Wireless Air Gunner School and No 3 Air Navigation School.

It was also an important staging point for military aircraft heading north to the New Guinea battle fields.

Parts of that history can still be seen in the guise of the Heritage Listed buildings that dot the airfield, one of which now calls itself home to the MAC.

In recent years MAC have played host to the Warbirds of Aerotec, a Toowoomba based organisation, who bring over a host of vintage military aircraft including T28 Trojans, Australian built Winjeels and the ever popular Yak 52 giving people the chance to experience a flight in a genuine Vietnam era warbird.

For those so inclined aerobatics can be included in the Adventure Flight – you haven’t seen the Fraser Coast unless you have witnessed it from an inverted perspective at 5000ft.

The experience of a flight in a warbird starts the moment you get strapped in and doesn’t stop until you are helped out of the aircraft at the end of flight.

Fraser Coast Wings and Wheels as its name suggests is not only about aircraft.

On the day there will be a plethora of vintage and veteran cars, motorcycles, trucks, tractors and stationary engines on display as well as many historical displays.

A number of attending pilots will also have their aircraft on display and will be only too happy to answer any questions you may have.

Food and refreshments along with market stalls will be available so you can be assured it will be a day the whole family can enjoy, and it won’t break the bank to attend.

Gates open to the public at 9am and although entry to the airfield is free a donation would be appreciated.

Money raised will support the operation of Angel Flight an organisation that sees private aircraft owners and their aircraft donate their time and machines to help overcome the tyranny of distance for many remote area patients who have to attend medical appointments in the main cities.

Maryborough Airport is located just off Saltwater Creek Road (the main road to Hervey Bay) on the northern side of the city and offers plenty of parking within easy walking distance to the full range of displays and attractions.

For all aviation details and other information about the Fraser Coast Wings and Wheels call Karin Middleton on 0429 111 260 or send an email to the Aero Club: secretary@maryboroughaeroclub.com

Be sure to mark August 11 for your calendar for the Fraser Coast Wings and Wheels, Maryborough Airport.

It will be a day that will make memories you will never forget.