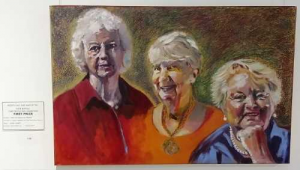 The Hervey Bay Competitive Art Exhibition has a long history from the founding members of the Hervey Bay Art Society to the biggest Art Exhibition on the Fraser Coast. It all started with a small group of artists who gathered at the CWA hall on Torquay Road, Pialba for the weekly meeting to paint and exchange idea’s.

In March 1971 at one of those meetings a motion was passed to formally establish the Hervey Bay Art Society, Maureen Campbell became the first president.

The group met regularly in the small CWA hall, but the members embarked on a mission to raise funds for the purchase of property that would become their permanent home. The best way to raise money would be to have exhibitions.

The first Annual Art Exhibition was held on the 28th of July to the 1st August 1983 at the Hervey Bay Hall and it was a big success. The committee and members grew in confidence and decided to make it an annual event.

In 1984 it became a  bigger and better organised art competition with the sponsorship of $1500 from local businesses and a larger number of participating artists. The Minister for Education and the Member for Isis Lin Powell officially opened the exhibition, he congratulated all the people involved in organising the event and for taking such a big step forward. Only a few cities of comparable size would be able to mount an exhibition of such quality  he said.

The two judges Peter Paglairino and Ross Calvert said the overall standard of the exhibition was exceptionally high and it had been a difficult task to select the winners. About 100 people attended a wine and cheese party before the opening ceremony. Hundreds poured through the doors of Hervey Bay Hall during the course of the exhibition.

Over the years  the annual art competition became a permanent fixture on the Hervey Bay culture calendar. In those early days, the venue changed from Hervey Bay Hall, Urangan Progress Hall, Memorial Hall, and then to the Sailing Club.

After 10 years of exhibitions and fundraising, the Society raised $40.000 and approached the State Government for a ‘dollar for dollar’ contribution towards the purchase of a building. They were not successful but they had found an old Bakery building in Sandy Street, Urangan which suited their needs.

A change in government encouraged the Society to make another application for funding which was successful. On the 18th of February 1993, the members held their first meeting in the new premises. More fundraising was needed to meet the cost of refurbishing the building. The yearly competitive art exhibition changed venues once again, as the new premises were not big enough to hold the event.

The yearly event has grown and now attracts artists from all over Queensland and Northern N.S.W,  the quality of the artwork is getting better each year.

Fraser Coast Council and local businesses are proud sponsors and supporters of the event, and with prizes totaling $ 6.700, it is one of the biggest art shows in the state.

Art and Culture are essential elements of a community, access to a diverse range of exhibitions enriches the lives of residents and visitors to the Fraser Coast.

The 35th Hervey Bay Annual Competitive Art Exhibition opening ceremony and awards presentation are on Friday 3rd August 2018 at 6 pm at the Regional Gallery. The members and the committee of the Hervey Bay Art Society are looking forward to another successful exhibition.