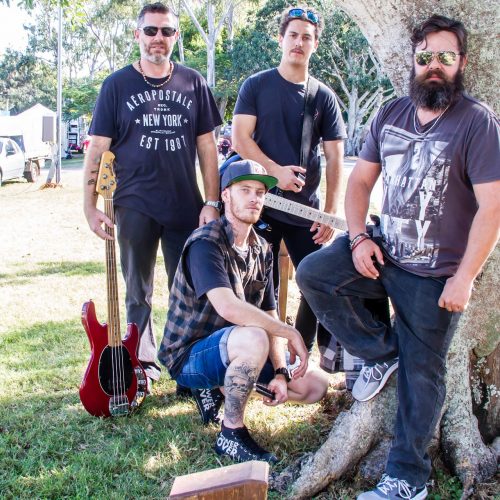 What kind of music do you play?

Rock and Roll with a few dirty ballads. We play covers and originals and have two albums out.

We try to sneak as many originals in when we are doing a cover show, you do have to pick your crowd though.

Who is the songwriter in the group, and where do you get your inspiration from?

Me, I get my inspiration through everyday life, sometimes I just come up with the riff and the music will write itself, or you will find something that matches the mood.  I have books filled with words that just need music, this is where the rest of the band come in.

I will hit record on my mobile phone that I keep beside me if I feel inspired during the night.

Six years ago, the video clip for the hit single ‘Borderline’ was aired and had some success. What was it like making a music video and where did the idea for the video come from?

That was a song that Damien Veness, our previous guitarist, and I wrote while we were down on the Gold Coast on the border of NSW and Queensland. It was exciting, we used lots of local faces. We were on a very tight budget with two video clips in two days the clip ‘Borderline was filmed at the Z-pac Theatre here in Hervey Bay, we made the electric chairs ourselves.

We are both anti-government, so we try to slide that in where ever we can. The inspiration behind Borderline was about being locked up and having to face the love of your life and trying to encourage them to move without you. It is that point in your life where you have to decide whether to push hard, or to languish away.

The band received its first nomination as finalists in the ‘Music Oz Independent Music Awards’ held at the Opera House in Sydney in 2012. How did it feel to be nominated?

It was amazing to be amongst a lot of great artists, we knew that we didn’t have a hope in hell, but we enjoyed being there it was great. I think for us we rode a high from that for a number of years. Until the second album came out and we had some success with that.

When was your second album ‘Here Lies Freedom’ released, tell us a bit about this album?

It was released in 2014, that was our first full band album. We were privileged to have Richard Butler play on the guitar we had Chris on the Bass, and Jason McNabb on drums and that was a good collaboration all of us working together to write the songs again.

You had some great success with this album with single ‘Little Birdie’ making its debut at number #22 in the Triple J Unearthed Top 100! Within two weeks subsequent songs on the same album peaked in the top five. What does it mean as an artist to make it onto the charts?

It is very exciting when you make it onto the charts. But the trick is not to let it go to your head, it is an opportunity to strike while the iron is hot and that’s when you have to get out on the road and tour. We have toured all the way to Magnetic Island, Townsville, Proserpine, Arlie Beach, and the Sunshine Coast.

We stopped the tour when I bought the Skate Park, we have just been doing local gigs since then.

What would you like to achieve as a band within the next ten years?

Within the next six months we would like to release a third album, whether it as an EP or an album we don’t know yet, but we want to get back on the road. We have endless material to entertain the crowds with. The boys in the band are awesome musos so it makes the job easy.

As a band how did you meet?

Years ago when we were doing up our second album and we were about to go on the road, and so Richard Butler actually had done the recording on the album and young Ryan was like his protege and he had just finished school so he came on tour with us, Craig Taylor has been playing on and off with Dogwood Crossing over the last ten years and Bennie has been with us now for about a year and a half so we have all known each other through the music circles and different bands over the years.

What advice would you give someone just starting out in the music industry?

Quit, (laughter), no just don’t go into it thing that it is all caviar and champagne It is not an industry to make money out of, it is an industry that you do because you love it. If you can do your local shows and festivals and earn money that way you can hit the road and be on the noodle diet, both are good fun so yeah, don’t take yourself to serious that is the key.

Why is your band so likeable: Because we are normal dudes. The songs tell a story, if people get something out of them that is awesome.

In 2011 Dogwood Crossing released the debut album ‘Fear of Change’ independently through MGM/Green and Waterfront Records. What was the album all about and where did the name come from, how long did it take you to make?

Damien Veness and I wrote that album, our previous guitarist we wrote a lot of stuff together in different places we would hire a hotel at the Gold Coast or at the beach and a lot of that was acoustic balance so it just sort of grew from there. We recorded our first album and our second album with Pacific International Music here in Hervey Bay the first one took us four days the second one took us a year and six months.