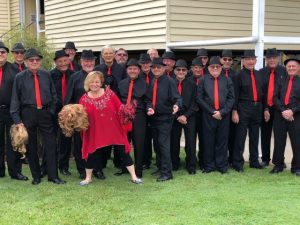 Carol Sendall, founder and Musical Director of Mansong since 2012 always had bold plans for the men’s chorus/support group when at inception Mansong members numbered just six.
Growing the number to fifty seemed ambitious; well that’s ticked oﬀ.
Performing at worthy community events, providing entertainment in retirement villages and nursing homes? Tick.
Performing stand-alone shows where Mansong’s music credibility was on the line? Tick
Providing a safe, enjoyable, supportive environment for mainly retired males, seeking purpose in activities post-retirement? Tick
To provide chapter and verse commentary on Mansong’s evolution may be of some interest to readers; however, the musings of an individual Mansong member; his FEELINGS about being part of something that is inspirational and special, best portrays Mansong in 2018.

Willem Eekelschot-Member since 2014: “The mature aged nurse attending me at my annual health check recently, enquired regarding hobbies; my activities in retirement, to which I replied; “MANSONG”. Her response, “What is Mansong?”.
I told the nurse this is a question I’m often asked, and I’m happy to take time to explain.
I regard Mansong as a mens’ shed (minus splinters!), but with diﬀerent tools.
Plus we have a foreman who is female; Carol Sendall, who with her impressive musical CV and a performance history spanning 5 decades, not only established Mansong, but remains integral to our future growth.
Carol’s Musical Direction is critical to Mansong, but more than that she understands that we have an inbuilt support group in Mansong, where involvement through practice and performance gives individuals like myself conﬁdence and belief, enabling us to set goals for ourselves. All this and we are receiving specialist musical training weekly!

I recall attending my ﬁrst Mansong show at our Senior Citizens Centre, the group looking smart in black outﬁts and hats, with red ties. The music they sang was from the Sixties era; Roy Orbison, Beach Boys, The Beatles etc.
Feet were tapping, hands were clapping and faces smiling, including mine!
The reason I didn’t sign up there and then was because I was brought up on Classical music; Mozart, Strauss and the like. I knew these tunes Mansong were singing, but not so well the words.
The next Mansong concert I attended, they were even better; people were singing along, clapping, smiling and even dancing. That was it, I joined up immediately, knowing I’d learn the lyrics over time.
I feel part of a special group of people, all committed to the growth and improvement of Mansong. Knowing Mansong is unauditioned removes some of the fear factors for men considering joining.”

Many of Mansong’s performances are in the community, for the good of the community. Others are professional shows where we are engaged by entities for fundraising events or often for pure entertainment.
Several performances each year are stand-alone shows, with musical arrangements by MD Carol; culminating in 2017 with a show at our wonderful regional theatre, The Brolga.
This was attended by some 400 followers, encouraging us to schedule another show for 2018.
I hope readers are inspired by Willem’s experience and are encouraged to attend our November show, to gain ﬁrst hand experience of the Mansong Phenomenon.

Tickets available at The Brolga – www.brolgatheatre.org – from Monday, October 1