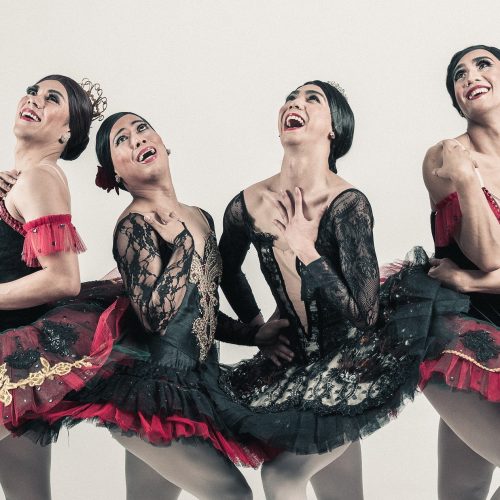 Les Ballets Eloelle’s Men in Pink Tights promises to entertain all those who go to see the show. With some great choreography, gorgeous costumes and lots of laughs it is a winner all the way.

Ballet Director, Victor Hugo Trevino was in Florida at the time of this interview but kindly answered a few questions for me. – Kim, Editor.

Tell us a bit about your background – Where were you born, where did you grow up and what was your childhood like?

I was born in a small city in Utah.  My parents were migrant farm workers and then they became entrepreneurs and business owners.  I came from a big family and I was the youngest child, so you can imagine I used humor to get myself out of a lot of situations with my older siblings.  I grew up working in my parent’s country store and a small restaurant they had.  I didn’t learn about ballet until I was in college at the University of Florida, where I was a business major.  I always enjoyed learning and was good with math and sciences.  I assumed I would one day work in my father’s business, so dance shook up my future and made my father very unhappy.  It took him many years of me working professionally and travelling globally before he finally stopped asking me when I would get a real job.

Tell us a little about Les Ballets Eloelle?

Ballet Eloelle (LOL) is a comedic all male classical and contemporary dance company.  I was asked to form a company in 1996 for the purpose of touring Japan.  That company was called Ballets Grandiva, Men in Tutus.  The company was featured in many magazines and television shows and had fantastic reviews in many papers.  In 2009 my mother starting getting ill and I felt I needed a break from touring and dancing.  Grandiva continued without me for a few seasons, but then began to fall apart.  Mark Rafter contacted me and asked if I would tour Australia and New Zealand with a group.  I took that opportunity to rework and tighten up the show and the concept of the show.  We did over a hundred performances under our new name and got back to our comedic roots.  The show now is a great balance of comedy and dancing.

Tell us a bit about the costumes and the makeup for Men in Pink Tights?

As you can imagine, it is not easy to find tutus for the male body.  All the costumes are handmade and designed by top costume designers.   The beading and feathers are all done by hand.   I thought it was important to hire costumers who worked with big companies, like the American Ballet Theatre.  In fact, some of our costumes look almost exactly alike.  In several instances, our costumes were made to look like theirs, but in a few instances, the designer made ours first and then I would see the same designs on world-class ballerinas.   The make-up is stylised, but beyond that, every dancer creates their own look. There are only a few restrictions.  They must wear wigs and their faces must pop on stage.

What is the one question that you wish Reporters would ask – and stop asking?

I really don’t mind answering any questions, but NO, my eyelashes are not heavy.  I appreciate reporters who have an understanding of dance and do not reduce what we do down to wearing women’s attire.  Most reporters though are pretty good about asking questions relating to dance, gender, culture and comedy and how those things can come together and have a commonality with the general public.  I guess the question I enjoy answering is how a non-dance audience responds and identifies with the humour in the show across so many cultures.   I like to think of us as ambassadors that can help bridge cultures through laughter.

What can the audience expect if they come to see your show?

I think they should expect the unexpected.  I think many people come to the show expecting it to be a simple dance show with men doing a lot of slapstick humour and dancing poorly on their toes.  While there might be a touch of that for a few laughs, overall, the show will surprise you.  We have performed this show on five continents, soon to be six. It is a unique show with unique personalities.   I think the most unexpected thing they might see onstage is the recognition of how those unique personalities onstage remind them of either themselves or people they know or situations they have experienced.  Our audiences hopefully leave with a smile on their face and a memory of a bunch of odd ballerinas that they identify with much more than they might have expected.

For ticket prices go to: www.brolgatheatre.org