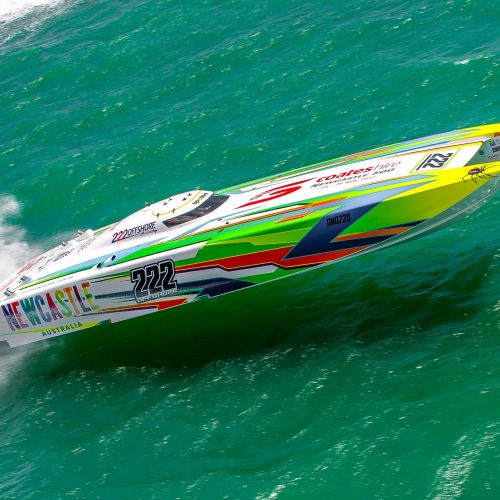 This month catch all the action on the water and on the land, with Round 3, of the Offshore Superboat Championships, right here in Hervey Bay.

On Saturday it is all about qualifying, you will get to see the Pole Position Shootout from 12 noon to 1pm as drivers vie to make it into Sunday’s finals. Then in the afternoon find a vantage point along the Esplanade, with your eyes on the road as from 3.30pm the Street Parade of Boats kicks off, beginning at the Urangan Boat Harbour, all the boats that are competing are paraded down the street much to the enjoyment of both adults and children alike, so don’t forget your camera.

On Sunday there are two races. Race 1 begins at 11am and goes for approximately thirty minutes as does Race 2 at 1pm. This fantastic event is supported by the Beach House Hotel, Handy Hire and Wide Bay Cranes.

The best spot to catch all the action is along the Esplanade between Torquay, near the surf club all the way down to Scarness, opposite the beach House Hotel. Scarness is where you will find the Race Control Truck, this is where the commentator calls the race from and also represents the start and finish line.

Make sure that you also get down to the pit area at the Urangan Boat Harbour as from 9am both days you can watch the huge boats being craned in and out of the harbour. You are also able to take a walk through the pit area to view the boats, talk to the drivers, get autographs and perhaps, request a photo with your favourite boat and its driver.

For the first time in Hervey Bay you will see Team Australia, driven by Brett Luhrmann in his supercat extreme. This boat has not one but two engines and can easily reach speeds of 210kph.

Also, you will see newcomer to the superboat series, Ken Tree on only his second outing in his Supercat Extreme called KKR.

While Mick Walker will be in a grand spanking new lime green superboat named Shifty Cat, this boat has been made locally at the Gold Coast and is sponsored by Hogs Breath.

Along the Esplanade between Torquay & Scarness