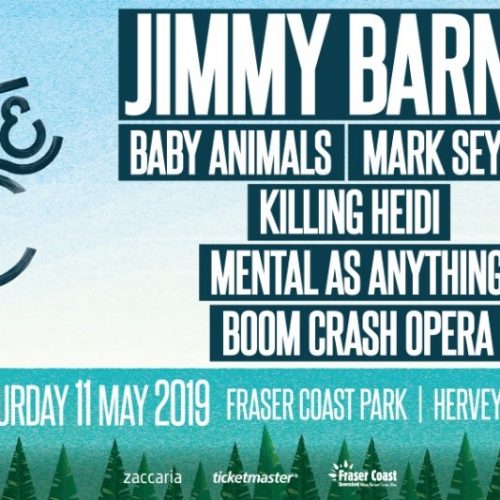 Aussie rock legend Jimmy Barnes will be joined by one of the most exciting line-ups of rock talent assembled in Queensland when he headlines the second annual By The C concert at Hervey Bay on Saturday, May 11.

Jimmy will command the stage with the Baby Animals, Mark Seymour & The Undertow, Killing Heidi, Mental as Anything and Boom Crash Opera.

The concert, at new venue Fraser Coast Park in Pialba, is being staged by the same partners who launched the first By The C event – Fraser Coast Tourism & Events, Fraser Coast Regional Council and Zaccaria Concerts and Touring.

FCTE general manager Martin Simons said the concert promised to be the biggest single-day event on the Fraser Coast in 2019 with a crowd target set at 6000.

“It’s a terrific drawcard for the region, designed to draw people within driving distance of the Fraser Coast  – from Brisbane in the south to Rockhampton in the north,” he said.

“More than 4500 people attended By The C last year, which was headlined by John Farnham, and about 40% of concert goers were from out of town.

“We expect accommodation bookings will be in high demand when people see the extent of this year’s talent line-up”.

Mr Simons said the concert was moving from the Seafront Oval to Fraser Coast Park, located between PCYC Hervey Bay, USC Fraser Coast campus and Hervey Bay Library on Old Maryborough Road in Pialba because of development work being carried out at Seafront Oval.

Fraser Coast Mayor George Seymour said the popularity of last year’s By The C concert and the huge crowds at Food ‘n’ Groove Fridays and Gatakers By Night showed that local residents loved to have a good time.

“The line-up for the May concert is a who’s who of Australian rock and is sure to appeal to a wide cross section of the community,” he said.

“The move to a new location will enhance the appeal of the event and cater for a larger crowd.

“The artists will also appeal to residents right throughout the Wide Bay-Burnett and beyond, which means more visitors to the Fraser Coast and a boost for our local economy.

“I am certainly looking forward to the concert and the opportunity to see and listen to some Aussie rock royalty here on the Fraser Coast.

“There is something really special about experiencing live music outdoors.

“This is an incredible line-up and I know it will be an amazing concert that people will be talking about for years to come.”

The By The C concert series was launched by Zaccaria Concerts and Touring in 2016 at Cottesloe Beach, Western Australia. Since then, it has brought some of the country’s best musicians to iconic coastal locations.

Tickets will be on sale on Friday, February 8, from 10am and available from Ticketmaster online at ticketmaster.com.au or by phoning 136 100.

The year that was