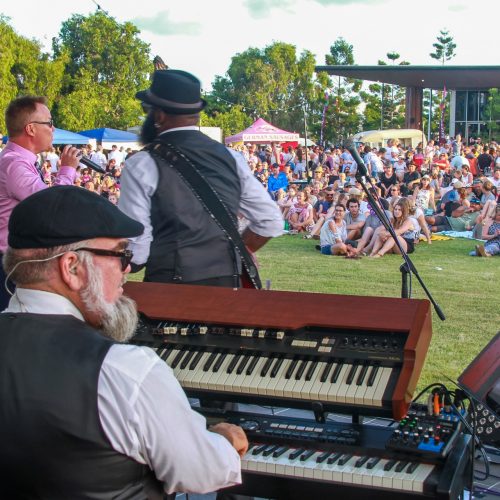 After a successful six-week summer trial, Food ‘n’ Groove Fridays will move from a weekly event to be held monthly until the Easter school holidays.

Robyn Peach, event manager for Fraser Coast Tourism & Events, said the move to holding Food ‘n’ Groove on the first Friday of the month during off-peak periods was the next stage of evolving the great new event established in Hervey Bay on January 4.

“To cement the viability and sustainability of the event, it’ll be held monthly until the high-visitation Easter school holiday period when it reverts back to a weekly celebration of food, live music and community,” she said.

“I’d like to thank everyone who has supported the event and encourage people to come along this week to enjoy the lively atmosphere.”

Mrs Peach said after the event this Friday, the next Food ‘n’ Groove in City Park, Pialba, would be held on the first Friday of the month, March 1, then April 5.

“As April 5 is the start of the term one school holidays, the event will be held weekly for the next two weeks – on Friday, April 12 and Thursday, April 18 – the Thursday before Good Friday,” she said.

Mrs Peach said Food ‘n’ Groove would then go into a hiatus period during the cooler months with the next season of the event launched at the start of the September school holidays.

“We have been blown away by the crowd support and the atmosphere created by the fantastic food suppliers and the bands that have entertained us each week since January,” she said.

“The support proves Hervey Bay is ready for this type of public event and we are excited to be able to announce the program for the coming months.”

“Fraser Coast Mayor George Seymour and council chief executive officer Ken Diehm and his wife Tania have been regular volunteers at the event bar, serving thousands of customers each week,” she said.

Mayor Seymour said as a regular volunteer at the event it had been fantastic to see so many people out enjoying themselves.

“I’m looking forward to the next event.”

Mrs Peach said the largest crowd at Food ‘n’ Groove was more than 5000 at the Australia Day event on January 25, with most attendances above 3000.

“By moving to a regular monthly slot outside of high-traffic school holiday periods in the warmer months, we believe we will have a fantastic, sustainable event that will continue to grow,” she said.

Food ‘n’ Groove Fridays is on tomorrow from 4pm to 9pm at City Park, adjacent to the Fraser Coast Cultural Centre in Pialba.