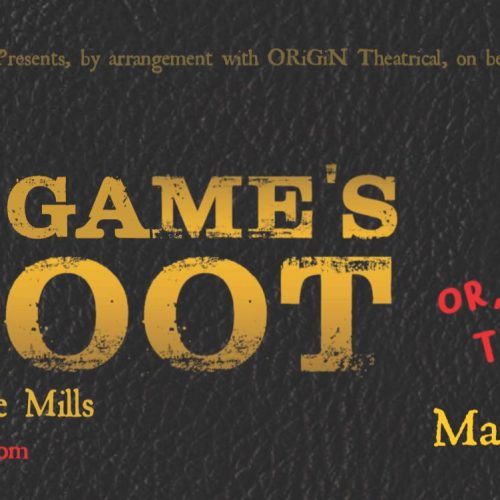 The Game’s Afoot (Holmes for the Holidays)

The danger and hilarity are non-stop in this glittering whodunit farce.

It is December 1936 and Broadway star William Gillette, admired the world over for his leading role in the play Sherlock Holmes, has invited his fellow cast-members to his Connecticut castle for a weekend of revelry. But when one of the guests is stabbed to death, the festivities in this isolated house of tricks and mirrors quickly turn dangerous. Then it’s up to Gillette himself, as he assumes the persona of his beloved Holmes, to track down the killer before the next victim appears. The danger and hilarity are non-stop in this glittering whodunit set during the Christmas holidays.

Director and Z-PAC President Liane Mills said she was initially drawn to this play because it combined the things many of our audiences enjoy so much – mysteries and comedies. However, she soon discovered it to be so much more, with the main character being William Gillette a fascinating man in real life who adapted Conan Doyle’s Sherlock Holmes’ books for the screen, created many technical innovations for the stage, introduced the signature Sherlock Holmes curved pipe and deer-stalker hat, and coined the phrase elementary my dear fellow (later adapted to Elementary my dear Watson).

Liane said her cast ranges in age from 21 to 84 and they all loved working together.  Theatre is a very special activity where you can put together people of all ages and all backgrounds and they can work together on equal footings to produce something that can be enjoyed by so many.

We have live music and a licensed bar at the Theatre.