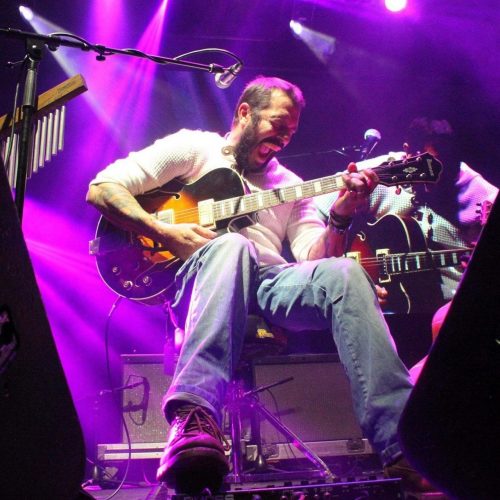 I am so excited; the Mason Rack Band will be back this month at the Beach House Hotel. If you haven’t seen them yet make sure that you catch them this time around.

Those avid followers of this magazine will remember that I conducted a live interview with the band in May 2017 and thoroughly enjoyed their performance.

Trust me when I say this band is like no other, especially when they play the beer keg drum and start throwing their drumsticks to each other without missing a beat. If you love the sound of rock and blues, trust me you will be in heaven!

Of course, I was thrilled to be able to have a chat once again with the man himself, Mason Rack. – Kim, Editor.

Are you looking forward to cruising with Suzi Quatro and performing in the sold-out show, Rock the Boat in October?

Yes, we are very excited to be part of this cruise. We basically get back from our European tour, head out to the Wingham Akoostik Festival on the central coast, then we get dropped off the next day at the cruise ship.

I can remember being quite young and hanging out at the Miami Skating Rink on the Gold Coast when I heard the Susie Quatro song, Devil Gate Drive with those catchy lyrics, ‘So come alive, come alive, down in Devil Gate Drive,’ this song has definitely stuck with me over the years.

So, to think that years later we will be on a ship with her is pretty cool. I also look forward to the lurks and perks, especially the food.

I last spoke to you in May of 2017, you were preparing for your sixth European Tour, how was the tour? What else have you been up to?

The tour was Awesome and was mostly sold out, we went to places like Germany, the Netherlands and Switzerland. We are actually gearing up to do it all again in September and October of this year.

We have signed up with a larger booking agent so we will be playing in a lot of new places around Europe. We are very excited about this trip as it may include places like Denmark and Czechoslovakia.

Just being in some of these places reminds me of where it all began for us and the hard work it took to get there.

Not long after we got back from our European tour, we attended the Gold Coast Music Awards and won Live Act of the Year 2018, we beat Amy Shark among others. It felt fantastic and it was so good to be recognised for our years of work.

We have also performed at all of the major festivals, and just recently performed for the Gold Coast City Council for Australia Day, there was a good crowd and it was right on dusk, just before the fireworks.

What is your new album called?

The Album is a collection of all the songs that I have liked from previous albums. It also features a new song called Time Again, this song reached number one on the Australian Blues Chart.

It sounds like you have another really busy year coming up, what else would you like to tell your fans?

At some point soon we hope to put on a charity gig to help raise money for the Townsville Flood disaster as so many houses have been lost.

My wife and I have also been fundraising for a large parcel of land which we would like to open up as an animal rescue centre, and also for drug and alcohol rehabilitation, this is one of our life goals.

Our main focus will be on trying to help other people and giving back. To us, it is all about leading a healthier lifestyle and encouraging as many people as possible to do the same.