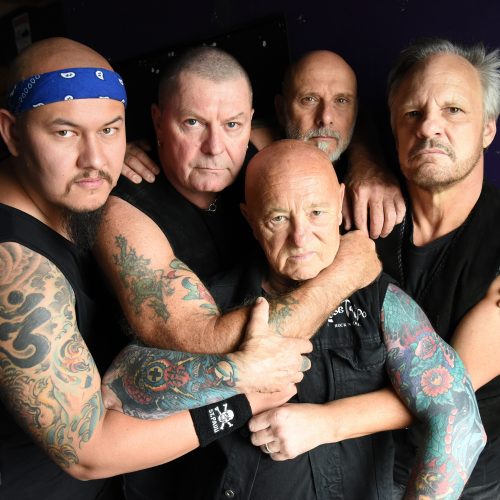 I last spoke to you in March of last year before Rose Tattoo rocked the Beach House hotel, and soon you will be doing it all over again. What do you think that it is that keeps people coming back?

Some of our fans have been following Rose Tattoo for forty years because the band and the music does something for them that no other band does. The relevance of the music – it is unique to us; we are the genuine article.

What is it like each time you get behind the microphone with Rose Tattoo?

Well, we have a new line-up that has a certain fresh urgent energy. A couple of our biggest fans that appear at a lot of our concerts recently pulled me aside to tell me that not since the early days of the band had they seen such a brutally relentless performance. They said that they had been excited all over again.

The band is different to any other line-up, each one has been unique and brought something new to each performance.

It was actually found in a box in a warehouse, we thought that the tape had been lost. It was found in a box with many other tapes from various other bands and artists.

It was a good recording, with a completely different line-up with some who are no longer with us. It was a typical moment out of Rose Tattoo’s history.

Do you have a message for the people of the Fraser Coast?

With Rose Tattoo, you know what you are getting. We are unique in every respect and give it one hundred percent every night.

You can help keep music live just by turning up, this keeps the industry going.

Rose Tattoo with Palace of the King

Get your tickets now!

On the Local Music Scene With Musician Aaron Westlake