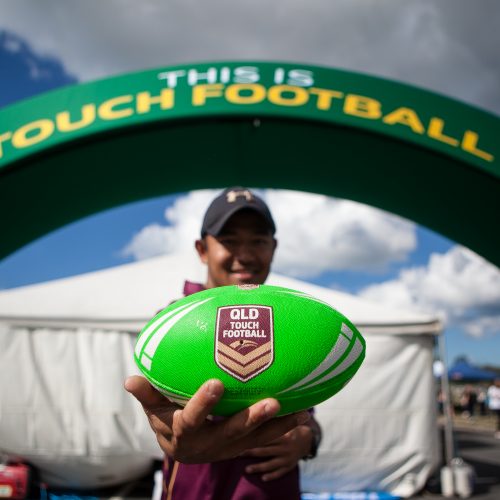 It was a jam-packed day here at the Qld Touch Football 2019 Junior State Cup, Day 1, Thursday 11 July. The chill-out zone powered by Optus was a great hit, it allowed spectators to relax and watch the livestream coverage from a beanbag on the Optus big screen. Players and parents were well looked after by fisiocrem and their onsite physiotherapists. There were 18 food vendors with 4 sports club plenty of choice for spectators. We’re the top state in Australia for juniors and youth in touch football and today we saw some exceptional touch footy.

Under 12 Boys Gladstone Vs Noosa Great game of touch football out on field 5 between Gladstone and Noosa. Gladstone eventually getting over the line with 5 tries to 4. 5-4 Gladstone Victory

Under 18 Girls Gympie Vs Toowoomba

Under 16 boys Redlands Green Vs Coolum 4-3 Coolum Victory It was nice to see the smaller affiliate Coolum taking it to the bigger affiliates of Redland.