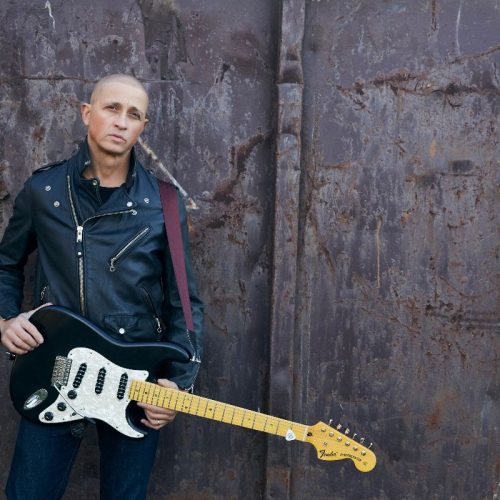 American born guitarist/singer Mark Lizotte, better known as Diesel, is heading to the bay this month to the delight of his many followers and fans. So there was no better time to have a chat about the man and his music. Kim Parnell

Tell us a little about your childhood, and the early years?

I spent the first six years of my life in a small house with six other siblings, in a tiny rural setting in Rhode Island U.S. Then my parents decided to make the random move to Australia, many moves followed. I went to a total of eight schools growing up, that impacted on who I am today. School can be brutal, especially when you are always the “strange one” but travelling can open your eyes to see how trivial people can be in an insular world.

How did the band Johnny Diesel and the Injectors start, and where did the name Johnny come from?

We started as remnants of a previous band “ Innocent Bystanders”, a band that had a singer-songwriter that we were all backing. I got sacked for playing too loud and the rest of the members decided to make a band with me, a newbie to being the singer-songwriter. We did one gig a week for months before being asked what we were called by the person who was booking the venue, as he wanted to place an advertisement in the paper. Earlier that day I’d heard a friend make a joke about our bass player, John Dalzel and his wife who had just fallen pregnant again, saying “ awww.. little Johnny Diesel and his little injectors” we all laughed and it stuck in my head enough to feed it to the person placing the ad. The ad went to print It and in the months that followed we never bothered to change it, the stakes were low at that stage. Consequently, being the person in the middle of the stage, I got stuck with it.

Your show is called Diesel – Give Me Saturday Night Solo Tour, tell us a bit about this tour?

Who were your inspirations growing up, where did the music spark come from?

Firstly my dad and siblings who were all into music, then people who were playing in the scene growing up in Perth. I started getting into venues at the age of fourteen and at the age of nineteen, I got to see Stevie Ray Vaughn play, that was the equivalent of someone seeing Jimi Hendrix years before, needless to say, life changed for me at the time.

As songwriting is such a personal journey, tell us a little about the process for you?

I am still mystified by most of the process which probably keeps my interest. It’s not something I can really plan but thankfully ideas just come through me. The challenge is always being able to make it into something the world can listen to.

What is the one question that you wish interviewers would ask you, and stop asking you?

“Cup of tea?” That’s always nice! Probably “what’s been the highlight etc..” I guess I don’t have a collector mentality when it comes to ‘highlights’ at least not with music… I can, of course, rattle off events in my personal life, but that’s probably not what’s being asked.

You have recently celebrated thirty years in music with the album, Diesel – 30 greatest hits, how hard was it to pick only thirty songs from your huge library of songs?

It inflated out to fifty-six songs and I was being conservative! However, I had to get real and shave it down to the nice number of thirty – that fits onto a triple vinyl set.

Your songs take us all to a different time and place and evoke memories for us all. What makes a song unforgettable?

I wish I knew! I think songs can link themselves to a time, a place and even weather or smells, etc… music is a sensory thing.

We recently had Jimmy Barnes performing here as part of By the C, are you able to tell us a little about your relationship with the man himself?

He’s my brother-in-law firstly, and I’m also lucky to be able to have collaborated on so many things with him over the years. Always inspiring, that’s him.

One of my favourite songs is ‘Cry In Shame’, what is the story behind the lyrics?

It was a riff that I had that didn’t have a home for about 6 months, finally, the rest of the song came just before we headed to Memphis to record our first record. Even as we recorded it, I had no idea it was going to be such a key track.

Have you been to the Fraser Coast before, if so what is your favourite memory?

There’s not many coasts in Australia I haven’t been to, but I’d have to say Fraser Coast is a standout. We are truly blessed in this country, something you really appreciate when you’ve spent time overseas.

What can people expect if they buy a ticket to see your show?

It’s a very diverse show to start with, maybe not what they would expect from one man onstage. Over the course of doing so many solo shows, I’ve gotten bolder with what I may have imagined the limits were of someone doing a solo show. It’s evolved and keeps evolving, a luxury I have of having the freedom of one man onstage.

Come out! Get off the couch! It’s good to be alive and also good to congregate with others around music. Let me work hard for you on stage and together we will forget about everything in the world for a few hours… sound good?

Tickets available at OZTIX or VENUE