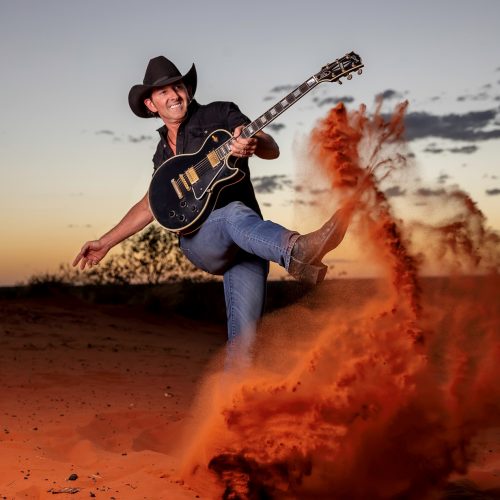 Country music singer/songwriter Lee Kernaghan was an absolute pleasure to interview a few weeks ago. He is warm, engaging, humble, witty and very open about the inspiration behind the lyrics and music of his songs. – Kim Parnell

Tell us a little about the Backroad Nation Tour?

I am bringing my new album ‘Backroad Nation’, to the people. It’s a big tour, right across Australia that includes every state and territory, it is a collection of songs that I have written over the last couple of years. The songs are about Australia, the places that I have been, and the people that I have met.

This tour includes forty-five shows, how gruelling is the schedule, what is life like on the road?

It is great to be on the road because I get to go with an incredible band called The Wolfe Brothers who are incredible performers in their own right. They have just won four gold guitars at the Australian Country Music Awards.

What is the first radio single – Wheels about?

Wheels is about one of my great loves, four-wheel driving and that sense of freedom that you get when you get off the beaten track and leave the rest of the world behind. You feel the weight that comes off your shoulders, it is a great place to be.

What was it like filming in the Northern Territory?

It was hot, (laughs) and dry but it was also epic. We filmed on the Finke Rd south of Alice Springs.  A good mate of mine, Troy Dann, who I have known for twenty-seven years, knows the outback like the back of his hand. He had a whole lot of great places and locations lined up along with land cruisers and eskies full of cold beer, it was terrific being out there doing it. Many of you would have seen Troy from the series ‘Outback Adventures’. He did all the crazy stunts like jumping out of helicopters into billabongs, wrestling crocodiles, swimming with sharks, and breaking wild brumbies.

Tell us about the songwriting process, what comes first for you. The music or the words?

Most of the time it starts with the title. To give you an example I was signing the tailgate of a bloke’s ute down in Shepparton and I asked him what he did for a living and he said, oh mate I milk cows, (laugh) so it just had to be a song.

On a road trip through Western Queensland, we did a bit of a pit stop in Texas and had a few drinks at the Royal Hotel and right then I knew there had to be a song called ‘Texas Qld 4385’.

On the new album, there is a song called ‘Watching Lightning’.  I was in Marble Bar up in the Hillsborough, we did a show at the Iron Clad Hotel. People had come from miles around to see the show. I spoke to one of the station owners in the carpark after the show about what life was like out there on the station. I asked him what he did for entertainment, and he said, “Mate we just muster cattle twenty-four-seven, but when the wet season comes the rain comes down the river, the river goes up. My missus and I turn the generators to the homestead off and we sit on the front verandah watching lightning”.  This is where the inspiration comes from.

You have won four ARIA Awards throughout your career, what do the accolades and awards mean to you?

They are amazing to receive but the recognition is not why you make the record or write the songs, that all has to come from the heart. The bar has always been set pretty high; I am always trying to make something better than the last thing that I have done. I just keep working on a song until I feel the goosebumps. ‘Flying with the King’, and ‘Spirit of the Anzacs’, are perfect examples of this.

My husband wants to know…what four-wheel drive/Ute are you driving at the moment?

Do you enjoy making the video clips, how involved are you in the process?

I do play a huge part in the creative process because I want to try to cut out all of the bad shots of me…which is a lot, (laughs). But yeah, the general process is you go out there shoot the video clip and then I get together with the Director after he has done his first edit, then we just sit together and work through it trying to get it as good as can be.

Even though I do have an idea of what I want the video clip to look like, you know Kim you never really know until you are out there. In Backroad Nation they were in the grip of drought. Trilby Station was so dry and dusty, but there were all these birds, these galahs just coming in. Where they feed the sheep there was little bits of feed left over and the galahs were swarming all around it. So, I never knew that I was going to have all these pink galahs in flight in the background on location but there they were as they appear in the video.

I would just like to say a huge thanks to all of those that have gone out and bought the ‘Backroad Nation’ Album, and for sending it to the top of the charts. I hope that the songs on the album bring you many good times and I can’t wait to see you on the national tour, it is going to be a whole lot of fun.