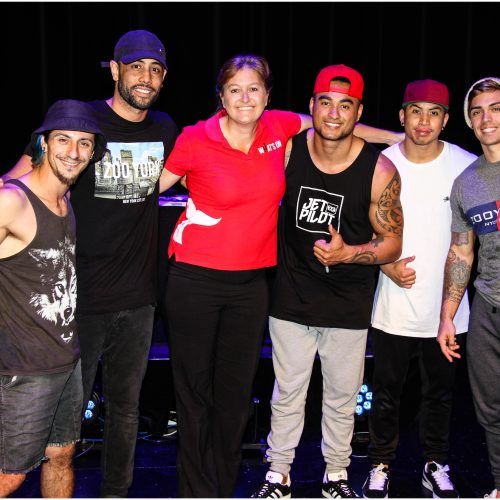 Australia’s most exciting group and eight-time ARIA nominees Justice Crew are about to hit the road on tour to celebrate their 10th year of performing as a crew.

Stealing the spotlight way back – taking out Australia’s Got Talent, Justice Crew have never looked back. In the years that followed, John Pearce, Lukas Bellesini, Paul Merciadez, Lenny Pearce and Solo Tohi transformed into Australia’s most exciting pop group, racking up number one singles, touring the country and writing with some of the hottest names in music.

Who would have known that a brash bunch of B-Boys have sold an excess of 1.8 million units in Australia, streamed globally over 50+ million times and nominated for 8 ARIA music awards.

In 2012 Justice Crew released their #1 ARIA single ‘Boom Boom’ and backed it up with two more ARIA Top 10 hits in ‘Everybody’ and ‘Best Night’. In 2014, they did it all over again with the anthemic ‘Que Sera’, breaking the Australian Chart history being the first Australian act since 1983 to take on nine weeks atop the charts.

Not only have the multi-platinum selling artists sold out to 8 headlined tours across the country, but they’ve also supported international big leagues Chris Brown, Janet Jackson, One Direction, Kesha and Pitbull. This year, Justice Crew have hit the ground running, they featured in the global TV Show “America’s Got Talent: The Champions” and released a brand new party track ‘So Long’. With the pace they’ve set, we can’t wait for what the future holds. Justice Crew will begin part 2 of their X tour on the east coast of Australia, so get ready for an action-packed night full of surprises.