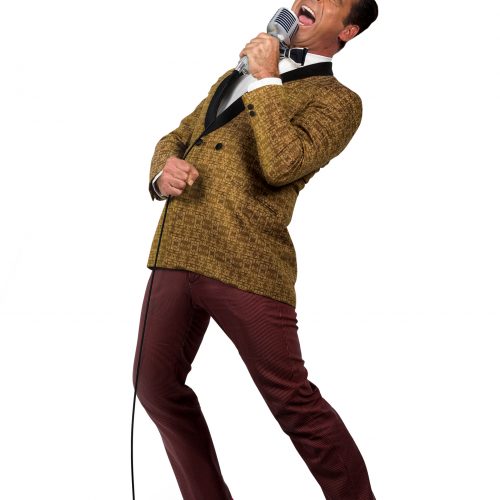 Johnny O’Keefe was the pioneer of rebellious Australian rock and roll, predecessor to the likes of Bon Scott, Jimmy Barnes, and Michael Hutchence that succeeded him. Often labelled as Australia’s Elvis, his explosive live shows left a mark on the best of the best in global rock royalty including Buddy Holly and Roy Orbison.

Having debuted his show to a sold-out season at the 2018 Adelaide Cabaret Festival and two sell-out shows at Palms at Crown Melbourne (for which he attracted a standing ovation each night), Johnny’s real wild nephew – the multi-talented Andrew O’Keefe – delivered an extraordinary performance in Andrew O’Keefe “Shouts” Johnny O’ Keefe. Highly applauded by the critics for his song interpretation and his storytelling, Andrew intertwines his own experiences with legendary stories of  The Wild One, and takes audiences on a very personal journey through JOK’s twenty-five year career, belting out classics like ‘Wild One’, ‘Sing Sing Sing’ and ‘Shout’ with the intensity topped only by Johnny himself.

From October of this year, Andrew turns his attention to the rest of Australia! Hit after hit, O’Keefe will deliver a captivating, mesmerising and thoroughly entertaining journey into the life and the stories of Johnny O’Keefe as he channels his Uncle from above.

Having started out in show business through musical theatre, Andrew O’Keefe is well versed in entertaining his audience. A star of Australian television, along with his many other talents, Andrew is a classically trained singer. In 2013, he entertained audiences nationally when he took to the stage playing the role of King Herod in the Australian tour of Jesus Christ Superstar Arena Spectacular. Andrew again graced the stage in March 2015 in the Harvest Rain’s Pirates of Penzance production held at QPAC, in a much-acclaimed turn as the swashbuckling Pirate King. In 2017, he toured a sell-out season of Gilbert and Sullivan Forever! – a wild cabaret romp through the much – loved G&S repertoire.

Andrew O’Keefe “Shouts” Johnny O’Keefe is an intensely inspirational representation of Johnny that Andrew delivers via the hits and his own words. His narrative, which includes personal family insights, gives Australia a never before heard or seen glimpse of what it was like to grow up with the king.