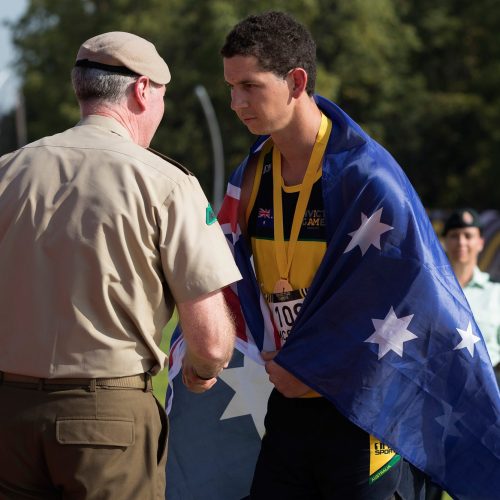 Unconquered – The Story of Stix McGavin

In 2012, Daniel Parker was a soldier in the Australian Defence Force serving a deployment in Afghanistan with the Second Combat Engineer Regiment. As a research commander, he and his team were responsible for planning the movement of soldiers in combat areas. One year later he was discharged. Physically and emotionally broken.

It was always Daniel’s desire to follow in his grandfather’s footsteps. “My grandfather was the most stable male figure in my life, and he prepared me for the military”. Daniel grew up in Warwick, Queensland in what he describes as a tough upbringing. “I came from a broken home, my mum was a drug addict and her partner was not a nice person. It was a bad place to be”.

Seeing the risk to Daniel, a local Warwick police officer offered him a place to live and finish school. Daniel played rugby league for the Clifton Warriors and found the training and friendships comforting. “It was my outlet and a way to distract me from the harder things in my life”. On finishing his schooling, he immediately joined the Army. At basic training, a tall and skinny Daniel Parker got the nickname, Stix McGavin. He would go on to serve in East Timor and Afghanistan.

Years of intense training, workload and overuse started to have a significant impact on his body and every joint began to break down. “I have had more surgeries than birthdays.  I have pins in my hips and a nerve stimulator in my spine”. The physical and mental injuries were so significant, that when Stix got back to Australia he was discharged. “I went from a high-risk commander leading 80 to 120 blokes on a route, making sure they all arrived alive. Back to Australia and they say, sorry mate you are too banged up for us. I didn’t leave, I was told I was no longer useful, so that was very hard on me”.

By 2015, Stix was suffering from clinical depression, anxiety, post-traumatic stress, and agoraphobia. He was overweight, heavily medicated, and felt a deep sense of rejection at being discharged by the Army. It was a friend who would give him a glimmer of hope when he told him about the Invictus Games. “It is basically the Olympics for any veteran that is wounded, injured, or sick. Giving them an opportunity to compete on a world stage”.

Sport was always a passion for Stix, so he set a goal to trial for the Australian team. The problem was, he would have to travel to Canberra. “I couldn’t be in a crowd, couldn’t go to the shopping centre and the thought of leaving my house would make me sick”. He trained his mind to be ready. He started going for short walks and listening to podcasts or music. He then broke the task into smaller pieces – leave home, go to the airport, get on the plane, get off the plane and then turn up to the trials.

He made it to the first trials in Canberra. A big victory! Then to the second, third, and fourth trials. After a year of trials, Stix McGavin was selected to represent Australia at the Invictus Games. In 2017 he travelled to Toronto, where he won a silver medal for the 200m sprint and gold medal for the 100m sprint. One year later, he returned to the Invictus Games at Sydney where he claimed 2 gold medals and 3 silver medals.

But the Games meant more than just medals to Stix. “I went to Toronto to find myself. But at Sydney, I went there to help other veterans find themselves”.  Now an athletics coach,

at the Hervey Bay Athletics Club, Stix has taken what he learnt and is using it to help others. “It has put me in a position where I am helping people again, mentally and physically. Healing and helping others does more for me than it does them”.

Stuart is a writer and podcaster for Entente Sport and the Future Champions Podcast series.